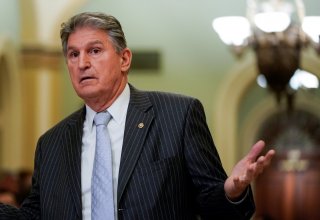 It’s been known for a few months that if President Joe Biden hopes to pass his Build Back Better reconciliation spending package, he’s going to need the vote of Sen. Joe Manchin (D-WV). Now, there’s a report about exactly what Manchin wants in order to vote for the package.

As reported by Axios Manchin, according to “sources familiar with the matter… has told the White House the child tax credit must include a firm work requirement and family income cap in the $60,000 range.”

While Manchin did not comment on the report, this is in line with what Manchin has previously said in interviews, while also asking for the overall size of the package to be brought down from Biden’s original ask of $3.5 trillion. Biden himself said last week that the final number will not reach the full $3.5 trillion.

The Senate is currently split 50/50 between the Democrats and Republicans. In the event of a 50/50 vote, Vice President Kamala Harris can break a tie. However, in order to get to that point, every Democratic Senator must vote for a piece of legislation, giving holdouts such as Manchin an unusual amount of power. The Biden bill, because it is being proposed under budget reconciliation rules, is not subject to the filibuster.

The Axios report also said that Manchin and Sen. Kyrsten Sinema (D-AZ), the other Democratic senator who has been skeptical about the spending package, held a call with a group of centrist House Democrats, “in which the senators detailed some of their specific concerns about Biden’s $3.5 trillion social spending plan.”

Sinema, according to the report, said she would not vote for the reconciliation bill until the House passes the separate bipartisan infrastructure package that Sinema herself had a hand in creating. Progressive lawmakers in the House have said for much of the summer and fall that they would not vote for the bipartisan bill first, but rather wish to pass the entire package at the same time.

The expanded child tax credit was brought into being earlier this year by the American Rescue Plan Act, which sent checks to Americans with children every month between July and December. The most recent payment was sent out last week, on October 15, but the Rescue Plan only funded the tax credit for one year.