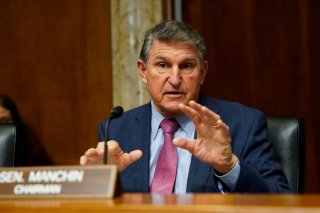 The expanded child tax credit was enacted for 2021 and mandated direct checks for most American families for the last six months of that year. It ended when the Build Back Better framework, which would have extended it for a year, failed in the U.S. Senate.

The senator who blocked the bill in the Senate was Sen. Joe Manchin (D-WV), who opposed the expanded credit. Subsequent reporting showed that Manchin had told colleagues he was worried that child tax credit recipients were spending the credit money on drugs.

According to WSAZ, a group of faith leaders in West Virginia rallied this week at St. John’s Episcopal Church in Charleston for the return of the credit and to “call on Catholics in the U.S. Senate, specifically West Virginia Democrat Joe Manchin.”

“In our Catholic social teaching, our tradition, we have something called the preferential option for the poor, which means that above all, the most marginalized people are at the center,” Meg Olson, the grassroots mobilization director at Network Lobby for Catholic Social Justice, said at the event. “In the bishops pastoral, from 1986, Economic Justice for All, it’s really all about bringing the marginalized to the center of our economy and putting people over profit.”

The senator reacted to the event in a statement to the TV station.

“Senator Manchin has always supported the existing child tax credit that is still in place despite the pandemic emergency enhancement sunsetting at the end of 2021,” the statement said. “He continues to support policies that reward hard-working families as the effects of costly inflation taxes strain their budgets. He has also made it clear that any change to our social safety nets should move through regular order.”

Without Manchin’s support, it doesn’t appear that any version of Build Back Better has a chance to pass through Congress. However, there have been reports that some negotiations have taken place on other aspects of Build Back Better that don’t involve the credit, such as climate policy and reducing prescription drug prices. But those talks appear to have stalled.

Manchin, meanwhile, appeared this week at the World Economic Forum in Davos and discussed these issues.

“The United States of America has an abundant supply of natural gas and oil,” Manchin said in Davos, per EE News. “And we can use our fossil and the cleanest technology humanly possible to make sure that we are reliable, we have reliability and we have security.”