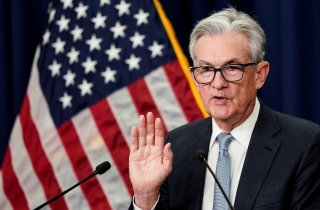 In an effort to tame persistent inflation that reached 9.1 percent last month, the Federal Reserve on Wednesday raised its key short-term rate by three-quarters of a percentage point for a second straight month.

The unanimously approved rate hike now puts the federal funds rate, which directly impacts what banks charge each other for short-term loans, at a range of 2.25 percent to 2.5 percent, the highest level seen since December 2018.

In its post-meeting statement, per CNBC, the rate-setting Federal Open Market Committee noted that “recent indicators of spending and production have softened.”

“Nonetheless, job gains have been robust in recent months, and the unemployment rate has remained low. Inflation remains elevated, reflecting supply and demand imbalances related to the pandemic, higher food and energy prices, and broader price pressures,” the committee continued.

The central bank again stated that it “anticipates that ongoing increases in the target range will be appropriate.”

Markets are expecting the Fed to hike rates aggressively through this fall and then start cutting rates by next summer. Fed chair Jerome Powell left the door open about the central bank’s next move at the September meeting, saying that it would largely be driven by what the data reveals.

“As the stance of monetary policy tightens further, it likely will become appropriate to slow the pace of increases while we assess how our cumulative policy adjustments are affecting the economy and inflation,” he said.

Despite the central bank’s hawkish stance over the past several months—emphasizing the importance of bringing down inflation even if it means slowing the economy—Powell said that he does not think the economy has been tipped into a recession.

“Think about what a recession is. It’s a broad-based decline across many industries that’s sustained more than a couple of months. This doesn’t seem like that now,” he said.

“The real reason is the labor market has been such a strong signal of economic strength that it makes you question the GDP data,” he added.

Earlier this week, Treasury Secretary Janet Yellen expressed similar sentiments by admitting that the U.S. economy is slowing but pointed to healthy hiring as proof that the country is not in a recession.

“The labor market is now extremely strong. Even just during the last three months, job gains averaged 375,000. This is not an economy that’s in recession,” she said on NBC’s Meet the Press.

“But we’re in a period of transition in which growth is slowing and that’s necessary and appropriate and we need to be growing at a steady and sustainable pace. So there is a slowdown and businesses can see that and that’s appropriate, given that people now have jobs and we have a strong labor market. But you don’t see any of the signs now—a recession is a broad-based contraction that affects many sectors of the economy—we just don’t have that,” she continued.