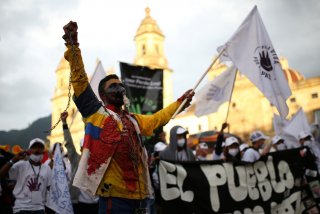 The murder of five students at a farm in Buga, in south-western Colombia, on January 24 highlights the fragility of the 2016 peace deal which brought to an end more than five decades of civil conflict between successive governments and the Revolutionary Armed Forces of Colombia (FARC).

January 2021 was the most violent month since the peace deal was signed, with 12 mass killings and total of 45 people murdered, according to the Colombian NGO INDEPAZ. The United Nations Verification Mission in Colombia and Human Rights Watch have recorded the deaths of 261 FARC ex-combatants and more than 400 human rights defenders and social leaders since 2016.

Colombia’s savage civil war between the central government and members of the left-wing FARC militia finally came to an end in November 2016 after years of negotiation. An initial referendum on the deal on October 2 was rejected by 50.2% of voters, but after further negotiation, an amended peace deal was finally signed at the Colón Theatre in Bogotá on November 24, and ratified by Colombia’s Congress on November 30. This date officially marks the end of the armed conflict in Colombia.

Álvaro Daza was one of many local community leaders who watched on television as the peace deal was signed. As a president of the Community Action Board Organisation (JAC) of the small town of El Vado in the Department of Cauca, south-western Colombia – and as a resident of one of the regions most heavily affected by the armed conflict – he was feeling extremely optimistic about the future. As he told members of JAC that day:

The peace agreement is an opportunity to help us as a community to ‘move on’ from past human rights abuses and turn the page of violence. Our victims will have peace on the day that we can reach justice. This is the best way to honour our dead. But to achieve reconciliation we need to promote sustainable development and peaceful coexistence across Colombia. This is our responsibility as social leaders.

On April 29 2020, two armed men – allegedly former FARC fighters – murdered Daza at his home in El Vado, along with his wife, son and granddaughter. A few months later, on October 30, unidentified armed men invaded the same house and killed his sister, brother-in-law and nephew.

The Colombian police said at the time that these murders were the work of illegal armed groups who saw the entire Daza family as an obstacle to achieving control of the region. But a report from Human Rights Watch said that the massacres occurred with the complicity and inaction of state forces that operate in south-western Colombia.

The Daza family’s case is far from unique. Across the region, former paramilitary groups, drug trafficking organisations and former FARC militia members are using massacres as a way to resolve disputes. These mainly take place in territory previously controlled by FARC where there is competition to dominate drug trafficking and illegal mining and there is little in the way of government support to implement the peace agreement.

Massacres have been used strategically for decades in Colombia as a means to spread fear and terror. According to the National Centre for Historical Memory of Colombia, there were more than 1,982 massacres of civilians between 1980 and 2012. In 2020 alone, the UN and Colombian NGO INDEPAZ recorded that 375 people died in 89 massacres (the UN defines a massacre as the killing of three or more people at one time).

Massacres as a method of violence

My research suggests there are two main reasons for the resurgence of massacres in Colombia. First, the 2016 deal set in place various mechanisms to achieve peace, including reconciliation and truth and justice investigations. These are a serious threat to illegal organisations in post-conflict Colombia, and criminal groups are using mass killings to let civilians know about the high cost of supporting the peace agreement.

Second, massacres – especially during long-term armed conflicts – tend to contribute to a culture of the “theatricalisation” of violence. Dismemberment and mutilation of victims – in these cases mainly human rights defenders and community leaders – send powerful messages of humiliation and work to dehumanise the opponents of the perpetrators. In post-conflict Colombia, the massacred bodies of human rights defenders and social leaders are often used as trophies by the groups that have rejected the peace deal.

The resurgence of massacres is the most critical challenge currently facing Colombia. The country’s president, Iván Duque, who was elected in June 2018, came to power with the promise that he would renegotiate what he described as a “lenient” peace deal, but also pledged not to “tear the agreement to shreds”.

But his government is in denial, referring euphemistically to “multiple homicides” rather than “massacres” and blaming the peace agreement and the previous administration for what Duque sees as the deal’s shortcomings.

Despite calls from the UN for the Colombian government to take action to protect civilians, critics say that the government is not doing anything concrete to provide a solution to the violence.

The impact of massacres on the implementation of the peace agreement is colossal. Peacebuilding is a lengthy process requiring long-term engagement and commitment from a diverse range of people and institutions. Community leaders and human rights defenders play a key role in representing the interests of ordinary people during the implementation of the peace deal and are vital in the fabric of social life after the war.

But these are the people being murdered in large numbers. If the Colombian government continues in denial like it has been, the 2016 peace agreement is under severe threat.