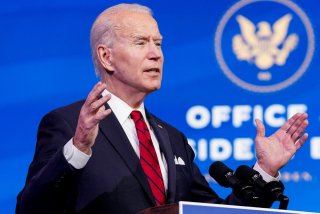 In an op-ed for Fox News, Pence championed the 2017 Tax Cuts and Jobs Act passed by former President Donald Trump, insisting that the bill propelled the economy to take “off like a rocket.”

Pence also touted how the former administration slashed the corporate tax rate, which brought “jobs and factories back home to the United States” since American companies “were no longer driven away by an exorbitant tax burden.”

The former vice president argued, however, that this economic progress would vanish if Biden’s tax plans pass, as he and Democrats are calling for an increase in the corporate tax rate from 21 percent, which was implemented by the Trump-Pence administration, to 28 percent. Pence and Republicans contend that a seven percent boost in the tax rate would drive headquarters overseas, harming the country’s competitiveness and eliminating thousands of jobs that would normally exist within the nation's borders.

The multi-trillion-dollar infrastructure and jobs plan would also raise taxes on Americans making more than $400,000 per year, though the provision’s specifics are unclear. While Biden has repeatedly said that no one making less than $400,000 annually would experience a tax hike, White House press secretary Jen Psaki announced during a press conference that the income threshold refers to family income.

“President Biden is threatening to bring back the anemic job growth, stagnant wages and rampant offshoring that defined his term as vice president,” Pence wrote.

The former vice president cited several effects that Biden’s tax agenda would have including, “Job growth will trickle to a standstill. Capital investments will be canceled. Fewer products will be Made in the USA. Manufacturers will pack up and head overseas, leaving a hole in the heart of blue-collar communities.”

Pence later added that China would largely benefit from Biden’s tax proposal, as it will “gain thousands of jobs as employers flee the crushing tax and regulatory burden of Joe Biden’s America.”

“The idea that a communist nation would be more hospitable to free enterprise than the United States is a cruel irony that our forebears never could have imagined—and yet it is precisely the future that awaits if President Biden and Democrats succeed,” he wrote.

But the president has recently been pushing for bipartisan support on his infrastructure and jobs package, as he asked a group of Senate Republicans to present a counter-offer to the White House, a meeting that senators described as “productive.” The meeting, however, reportedly yielded no progress on an agreed price tag, how the bill would be funded and how many years it would cover.

The Biden administration is reviewing the GOP proposal this week.