Is Mike Pompeo Getting Ready to Run For President in 2024? 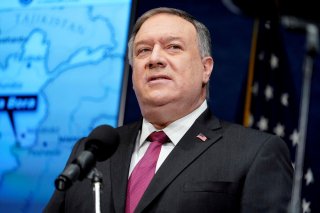 Pompeo told Politico this week that his focus is on seizing control of the House and Senate as he plans to make trips across the country to bolster his support for the GOP.

“It is unambiguously clear to me that if we don’t get it right in the next sixteen or seventeen months, what will happen over these next four years will make it incredibly difficult for whoever is elected president in 2024. So that is my singular focus,” Pompeo said.

The former lawmaker from Kansas is reportedly calling it the Champion American Values PAC and will be able to raise unlimited funds to boost the support for GOP candidates running at the federal, state and local level. Pompeo has also told congressional leaders in both chambers that he would offer them help ahead of the 2022 midterm elections.

The announcement comes as Pompeo has been widely speculated as a potential GOP presidential contender in 2024, as he’s already made trips to Iowa and New Hampshire, which are both early voting states in the presidential primaries, and plans to visit Florida later this week and California next month for campaign events and conservative fundraisers.

But like all other speculated Republican presidential candidates, Pompeo hasn’t formally indicated whether he’ll take a crack at the White House. Experts say that potential candidates are likely waiting for former President Donald Trump to reveal his plans for 2024 before deciding whether to launch a presidential campaign.

Trump has also boasted his intentions leading up to the midterm elections, as he’s announced that he’ll stand behind candidates who have remained loyal to him and his administration’s agenda. Senate Minority Leader Mitch McConnell (R-Ky.) and other members of the GOP who have distanced themselves from the former president will not receive Trump’s support.

Pompeo’s move follows similar initiatives from two other potential 2024 presidential contenders, former Vice President Mike Pence and former U.S. ambassador to the United Nations Nikki Haley. Both have formed committees and declared their commitment to electing Republican candidates in next year’s election, in addition to traveling to key states for speeches and fundraisers.

This summer is likely to be packed with conservative initiatives aimed at regaining the House and Senate next year, with party leaders eyeing a 2024 White House bid crawling to the center of political talks to rally national attention.