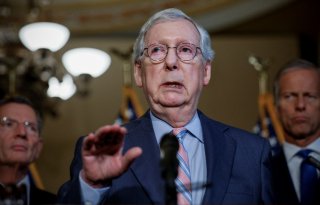 Now it’s the Republicans’ turn to be mad at Sen. Joe Manchin (D-WV).

For the first year and a half of the Biden presidency, it was mostly Democrats who were irked by Manchin, seen as the furthest to the right of the fifty-member Senate Democratic caucus. Manchin had blocked what was known as the Build Back Better bill, which among other things, would have extended the expanded child tax credit for an additional year.

Democratic vitriol at Manchin has quieted recently, especially after Manchin agreed to support the Inflation Reduction Act, which included some provisions related to climate and health care that were in the Build Back Better agenda.

But now, Republicans appear to be retaliating against Manchin.

According to Politico, Sen. Mitch McConnell (R-KY), the Senate Minority Leader, spent Tuesday “urging Senate Republicans to vote no” on a Manchin-backed provision for permitting reform, which is part of the existing government funding package.

Last week, Manchin spoke on the Senate floor to make a case for the reform legislation.

“No matter what you want to build, whether it's transmission pipelines or hydropower dams, more often than not, it takes too long and drives up costs. You can double your cost within a five to six, seven-year period from what the original cost may have been. Look here at the energy prices, look what the people in America are facing right now. 200% increase in natural gas, increases to regular gasoline is up 67%, residential electricity is up 15%. We've got a good piece of legislation that is extremely balanced,” Manchin said, per a transcript posted to his Senate website.

True to the image he has sought to cultivate as a moderate, Manchin painted the opposition to his bill as “far-left Senators and Republican leadership.”

“I guess the old saying goes that politics makes strange bedfellows,” Manchin said. “I have to be honest with you, I've been around for a long time in state politics and federal politics. I've never seen stranger bedfellows than Bernie Sanders and the extreme liberals siding with Republican leadership. In the Democratic caucus, I've never seen this happen. So, what I'm hearing is that this is revenge politics towards one person, me. And I'm thinking, this is not about me.”

He went on to question the motives of his opponents.

“If my Republican friends and colleagues are attacking me personally, take it away from me personally, because that's going to be hard to go home and explain,” he said. “To say, ‘We did this and we voted against it because of Joe Manchin’ makes no sense whatsoever. None whatsoever.”

Unfortunately for Manchin, the “Grim Reaper” of the Senate has struck again. Late on Tuesday evening, Manchin reportedly “threw in the towel,” according to Bloomberg News correspondent Erik Wasson, after he was unable to rally enough votes to include his priority in the spending package. Manchin then asked Senate Majority Leader Chuck Schumer to remove the permitting language from the continuing resolution, ensuring the measure’s end.