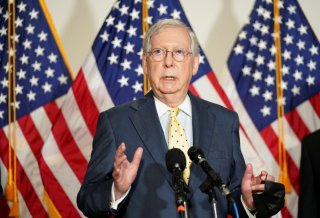 Senate Minority Leader Mitch McConnell (R-KY) on Tuesday confirmed his support for his chamber’s emerging bipartisan gun safety agreement, adding that he hoped an outline of the accord would be translated into legislation and enacted.

The agreement, reached this past weekend, has garnered the support of at least twenty senators who worked closely over the past several weeks to find the areas of common ground on the highly contentious issue.

With McConnell’s backing, the legislation would have at least sixty-one votes—one more than necessary to overcome a Senate filibuster.

“For myself, I’m comfortable with the framework, and if the legislation ends up reflecting what the framework indicates, I’ll be supportive,” McConnell told reporters after his weekly Senate GOP lunch, per The Hill.

According to the Associated Press, he added that the proposal “further demonstrates to the American people” that lawmakers can work together on significant issues “to make progress for the country.”

Senators and aides are expected to translate their broad agreement into legislation in days, in hopes that Congress could approve it before leaving for its Fourth of July recess. Both sides have acknowledged that the process could encounter disputes and delays.

The bipartisan agreement includes support for state crisis intervention orders, more funding for school safety resources, an enhanced review process for gun buyers who are under the age of twenty-one, and penalties for straw purchasing.

The legislation also includes a “red flag” provision, with the government providing “resources to states and tribes to create and administer laws that help ensure deadly weapons are kept out of the hands of individuals whom a court has determined to be a significant danger to themselves or others,” the bipartisan group’s release stated.

As for boosting school security, the senators noted that the proposal provides funding “to help institute safety measures in and around primary and secondary schools,” while also supporting “school violence prevention efforts” and training for school employees and students.

Some Republicans, however, expressed dissatisfaction with the agreement, with much of the criticism directed at its encouragement of “red flag” laws. Nineteen states already have “red flag” laws, but Republicans have blocked efforts to implement them through federal legislation.

“If we’re not going to pass a federal red flag law, and we shouldn’t, why would we incentivize states to do something that we think is a bad idea?” Sen. Kevin Cramer (R-ND) said on Tuesday.

Meanwhile, Sen. John Cornyn (R-TX) defended the plan’s “red flag” proposal, saying that it wouldn’t create any national requirements for such laws. He noted that it gives “every state regardless of whether it has a ‘red flag’ law or not” money for programs aimed at improving public safety and helping troubled people get assistance.