Is Mitt Romney Still Considered a Republican? Some in the GOP Say No. 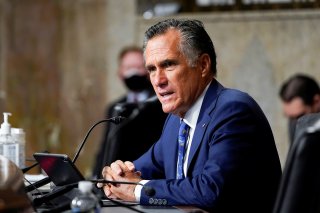 After Romney was announced to speak, it wasn’t long until the crowd of more than twenty-one hundred delegates unleashed harsh boos and digs toward the Utah senator.

“So what do you think about President Biden’s first one hundred days?” Romney said once he arrived at the lectern.

“Now you know me as a person who says what he thinks, and I don’t hide the fact that I wasn’t a fan of our last president’s character issues,” he said, igniting boos from the audience.

Romney tried to continue his speech but instead, paused for a few seconds and asked the crowd, “Aren’t you embarrassed?”

The senator’s appearance comes just before a resolution to censure Romney for breaking with Trump and voting to remove him from office fell flat, as it failed by a 798 to 711 vote, according to Utah Republican Party spokeswoman Lynda Cox.

Don Guymon, the sponsor of the censure resolution, argued in the past that Romney “should be held accountable” for voting against Trump in both impeachment trials. Guymon also said that Romney’s public criticism toward the former president “not only hurt President Trump’s reelection but hurt other Republicans on the ballot.”

Romney has often broken with Trump on a number of issues, as he was the only Republican in the upper chamber to vote to convict the former president of abuse of power in 2020. The senator, however, was one of seven who voted to nix Trump from office for his involvement in inciting an insurrection on the U.S. Capitol on Jan. 6.

During his speech over the weekend, Romney dubbed himself as an “old-fashioned Republican” and added, “Oh yeah, you can boo all you like, but I've been a Republican all my life. My dad was a governor of Michigan, my dad worked for Republican candidates that he believed in. I worked for Republicans across the country, and if you don't recall, I was the Republican nominee for President in 2012.”

One of Romney’s fellow colleagues, Sen. Susan Collins (R-Maine) who also voted to remove Trump from the White House during his second impeachment trial, told CNN’s State of the Union that she was “appalled” by the crowd’s response to the Utah Republican.

“We Republicans need to remember that we are united by fundamental principles, such as a belief in personal responsibility, individual freedom, opportunity, free markets, a strong national defense,” Collins said on Sunday. “Those are the principles that unite us. We are not a party that is led by just one person.”

The Utah GOP’s boos highlight a major rift that still exists within the Republican Party in the post-Trump era, as congressional leaders are trying to unite a party that’s been divided into factions based on how tightly they’ll cling to Trump ideology.