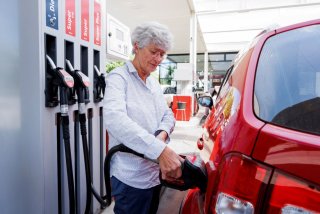 For nearly two months now, long-frustrated American motorists have been on the receiving end of much-needed relief at the pump.

According to AAA data, the average national price for a gallon of gas dropped to $4.11 on Friday, with prices sinking a hefty 10 cents a gallon since Monday.Gas prices have fallen for more than fifty consecutive days and are on track to decline by about 20 percent from June’s all-time high of $5.02 per gallon.

Even more positive price action could be ahead. Patrick De Haan, head of petroleum analysis at Gas Buddy, is now seeing gas prices dipping below $4 per gallon in the coming days.

According to Ellen Wald, a senior fellow at the Atlantic Council, the reason for the price drops at the pump is largely due to Americans cutting back on driving to cope with current high inflationary pressures.

“We have seen some of what we call demand destruction—people choosing not to buy gasoline because it's so expensive,” she told CBS News. There are “fears we could be entering a global recession, [and that] could be driving prices down.”

AAA spokesperson Andrew Gross expressed similar sentiments. “Consumers appear to be taking the pressure off their wallets by fueling up less,” he told Fox Business. “And there’s reason to be cautiously optimistic that pump prices will continue to fall, particularly if the global price for oil does not spike. But the overall situation remains very volatile.”

New data from the Energy Information Administration (EIA) shows that gas demand dropped from 9.25 million b/d to 8.54 million b/d last week. AAA noted that the rate is 1.24 million b/d lower than the year prior and is in line with overall demand at the end of July 2020, when Covid-19 restrictions were in place across the country.