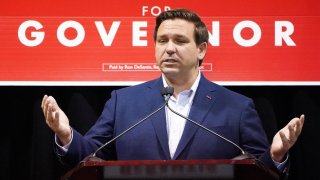 A new poll conducted by the University of New Hampshire is showing that the Republican primary race no longer looks like a runaway for former President Donald Trump.

As reported by Newsweek, Florida Gov. Ron DeSantis, who was highly praised by conservatives during the pandemic for fighting against shutdowns and COVID-19-related mandates, is leading the Republican field and is considered the better option than Trump to face off against President Joe Biden in a hypothetical 2024 general election.

According to the poll of 845 likely voters, per CNN, DeSantis took 39 percent of the votes, while Trump settled with 37 percent. Former Vice President Mike Pence came in at third with 9 percent.

The news outlet pointed out that the results were a “major change from where the race was last fall.” The poll in October 2021 revealed a hefty lead for Trump over DeSantis—43 percent to 18 percent.

“Trump slipping in pre-primary polls is part of a typical pattern,” Andrew Smith, director of the University of New Hampshire’s Survey Center, said in a statement.

“A party’s losing candidate in the prior election is typically the best-known person in their party. As the primary gets closer, new candidates emerge and attract more media attention, and therefore more voter attention, than the losing candidate from the previous election,” he continued.

The poll also revealed that only about six in ten self-identified Republicans want Trump to run again in 2024.

It is “a further sign of Trump's weakening support among New Hampshire Republicans,” the survey said.

Meanwhile, according to a Politico report on Wednesday, DeSantis has not asked Trump for a formal endorsement in his 2022 reelection for governor and isn’t planning to.

“DeSantis’ decision to forgo a Trump endorsement is a stark contrast from four years ago,” the news outlet wrote.

“In 2018, DeSantis was seen as a long shot challenger, running against then-Agriculture Commissioner Adam Putnam. Putnam had backing from the Republican establishment and a money advantage. But DeSantis shook the foundations of the race when he picked up a crucial endorsement from Trump ahead of the primary,” it continued.

A person familiar with Trump’s endorsement process told Politico that if DeSantis asked for the former president’s backing, “he would endorse him.” It added that such an endorsement “would not likely change DeSantis’ frontrunner status in Florida among his Florida supporters.”

Trump, though, has been largely dismissive of DeSantis’ White House aspirations.

On Monday, Trump told Newsmax that his relationship with DeSantis was “very good.”