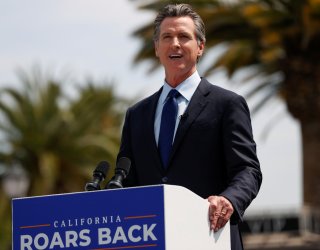 “But we do suspect that most Mississippians will not be interested in what he is selling,” he continued.

“[Spending] $2 million in California will get you like, 2 a.m. on some really random cable channel,” he continued. “But if you’re spending $100,000 on billboards in red states, and you’re getting earned media, that’s probably worth the equivalent of like a $4 million or $5 million media buy.”

Throughout the past year, Newsom, who is expected to win his reelection bid this fall, has taken other actions to raise his national profile by going after governors in red states.

For example, in early July, he took out an ad on Fox News in Florida that attacked Gov. Ron DeSantis. Later in the summer, he bought full-page ads in Texas newspapers that highlighted Gov. Greg Abbott’s lack of support for gun-control measures in the wake of the deadly school shooting in Uvalde. And on Thursday, Newsom sent a letter to U.S. Attorney General Merrick Garland that pushed for a formal investigation into reports that DeSantis and Abbott transported migrants from the southern border to New York, Washington DC, Chicago, and Martha’s Vineyard in Massachusetts.

On Tuesday, Newsom announced that his state launched a new website, Abortion.ca.gov. The site aims to assist people inside and outside California with information about abortions, their legal rights, where to find providers, and how to pay for services and financial assistance.

“Abortion is legal, safe and accessible here in California—whether or not you live here, know that we have your back,” Newsom said in a release, adding that the new site will not collect any personal information about visitors. “As Republican states continue rolling back fundamental civil rights and even try to prevent people from accessing information online or crossing state lines for care, you’re welcome here in California and we’ll continue to fight like hell for you.”