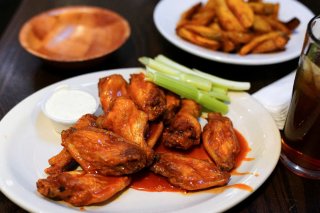 There have been a lot of media reports about shortages in the last year, from ammunition to baby formula to coins. One pattern has been that there’s a lot more media coverage of the shortages than when supply returns.

One exception: the news this week that prices of chicken wings are finally coming down.

According to NBC News, which cited the Department of Agriculture’s price index for chicken wings, the average price has finally gotten back to pre-pandemic levels.

The average wholesale price of a pound of wings has sunk to $1.68, its lowest level since 2018. The price is trending lower for August but may rise again this fall, as the onset of football season leads to a notable rise in chicken wing demand.

In May of 2021, Vox reported about the then-chicken wing shortage, attributing the issue to “big business and bad weather.”

“As national and regional chains rushed to meet the demand of the pandemic delivery market, a natural first inclination was to add chicken wings to the menu," the Vox piece said.

"In conjunction with the push to support locally owned businesses and struggling bars, demand for chicken reached its highest levels in years, and reserves are at the lowest levels seen in a decade. To the average person, this factor alone doesn’t really matter. But when you consider that massive corporate chains with more buying power than your local bar are now competing for and snapping up the same wing stock, the effect is higher prices at local spots you love and stable prices at lesser wing providers,” the report added.

Some chains even began pushing thighs as a wing alternative.

Back in July, the National Chicken Council's trade association published a survey showing that Americans continued to rely on chicken even with inflation.

“When the dust settles in 2023, if you’ve raised prices 20 percent over that period, you’ll be left with a higher-priced brand that needs to be supported with some sort of value proposition. Whether it’s a special benefit, package or ingredient, consumers will seek a justification for the higher prices and good reasons not to switch to a less-expensive brand,” Chris DuBois of research firm IRI said in that report.