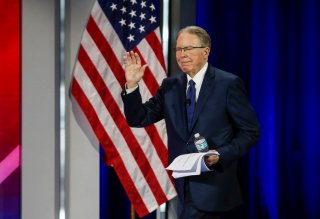 Even as gun proliferation in the United States has proliferated in the last two years, the National Rifle Association, the organization most associated with gun advocacy, has had something of a rough go of things.

The NRA was sued by the office of the New York Attorney General last year, with the organization itself and several top executives accused of fraud and financial misconduct. Later, a Texas judge shut down the NRA’s bid to declare bankruptcy in that state. There were later negative reports about the organization's longtime head Wayne LaPierre, one of which was that LaPierre had hunted an elephant but failed to deliver a kill shot.

Now, there's word that the NRA has elected new leadership—and that LaPierre remains a part of it.

The NRA announced over the weekend that Charles Cotton has been elected its president, with LaPierre, despite the bad press, being re-elected as CEO and executive vice president.

“It is the honor of a lifetime for a guy who grew up hunting and plinking to become president of this 150-year-old organization—and serve our 5 million members in their fight for the Second Amendment,” NRA President Charles Cotton said in the announcement. “The proceedings in Charlotte were an amazing celebration of NRA fellowship and freedom. Under the direction of Wayne LaPierre, the NRA is strong and secure—well-positioned to chart its course for the future.”

“The NRA is focused and energized—standing tall in the face of unprecedented attacks on our Association and constitutional freedoms,” LaPierre said in the announcement. “I am honored by the trust placed in me by the NRA Board of Directors and the millions of patriots they represent. Together, we will continue to confront our adversaries, and fight for our freedoms and values. We are resolute in our mission as America’s greatest defender of constitutional freedom.”

Last month, per the New York Post, NRA board member Roscoe Marshall Jr. filed court papers calling for the replacement of the organization's current board and top executives, including LaPierre.

Per the Post, Marshall "asked to intervene in New York Attorney General Letitia James’s lawsuit seeking to break up the organization over allegations that top execs, including LaPierre, siphoned millions of dollars and otherwise flouted non-profit rules to fund lavish lifestyles." Marshall called for the group to be placed in receivership, possibly with himself as the receiver.

“The NRA’s decision to re-elect Wayne LaPierre and other top leaders yesterday despite the detailed evidence of repeated fraud and self-dealing we have laid out in our lawsuit and during the bankruptcy trial underscores that board governance is broken and that the rot runs deep at the NRA," the New York Attorney General said.

"For years, Mr. LaPierre and his lieutenants used the NRA and its donors as a breeding ground for personal gain and to live a lavish lifestyle, which is why they must be removed. Our fight for transparency and accountability will continue because no one is above the law.”