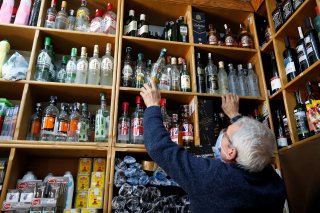 Among the many shortages that have been reported around the United States since the start of the pandemic, from gasoline to ammo to lumber to coins, there is now another: booze.

It hasn’t been national but some areas of the country, especially North Carolina and Vermont, have experienced shortages of liquor in recent weeks.

WNCT reported this week that North Carolina has seen a shortage, in part because of the way the alcohol industry in that state is structured, with the “sale, distribution, and prices of liquor” run by 170 Alcohol Beverage Control Boards. And South Carolina, which does not have such a system, has not experienced a similar shortage.

“The coronavirus pandemic has exacerbated the supply chain issues in several industries from meats to materials like glass, and worker shortages, as more people get vaccinated and life gets back to normal,” according to reporter Catherine Muccigrosso.

The problem was addressed this week during a meeting of North Carolina’s Alcoholic Beverage Control Commission.

“We all are experiencing the supply and demand shortage, and hopefully that will resolve itself in time,” Zander Guy Jr., chairman of the commission, said.

Meanwhile, in Vermont, which also uses a “control” model, there have also been reports of liquor shortages, per WCAX, a CBS-affiliated news station.

“When consumers see empty shelves and empty spots on the 802 Spirits stores, we have to understand that we have a global supply chain issue,” Vt. Department of Liquor and Lottery Deputy Commissioner Wendy Knight told a WCAX reporter.

Vermont saw a 13 percent increase in liquor sales during the pandemic.

“There’s enough to at least have your second choice, if not your first,” George Bergin of the Beverage Warehouse in Winooski told WCAX. “With all the bars and restaurants opening up everywhere, everyone is trying to restock their shelves and it’s just taking a little bit of time to get caught up with the sudden demand.”

Indeed, alcohol consumption rose during the pandemic by as much as 14 percent.

“During the COVID-19 pandemic, we should really ask ourselves what risks we are taking in leaving people under lockdown in their homes with a substance that is harmful both in terms of their health and the effects of their behavior on others, including violence,” Carina Ferreira-Borges, WHO Europe’s program manager for alcohol and illicit drugs, said in a statement.