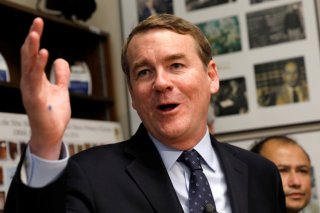 The expanded child tax credit was initiated in 2021 by the American Rescue Plan Act, and involved giving most American families direct payments, once a month, for the last six months of last year.

Democrats in Congress had hoped to keep the credit going beyond 2021 via the Build Back Better legislation that passed the House last December. But that bill soon died in the Senate, putting an end to the payments and causing the child tax credit to revert to its pre-2021 version at the start of 2022. Yet one Democratic senator said in an interview published this week that he hasn’t given up yet on the credit.

“Here we had a case where tax cuts for working people and poor people weren’t [extended] and Congress went home. And I think it’s a disgrace,” Sen. Michael Bennet (D-CO) said in an interview with CPR News. Bennet was among the lawmakers who had been pushing for an expanded child tax credit for many years, even prior to the start of the pandemic. It then became a reality, if only temporarily.

“Unfortunately, it’s a reflection of the priorities around here,” he said. “Since 2001, we've cut taxes by almost 8 trillion [and] almost all of that has gone to the wealthiest people in the country.” While some have opposed the expanded child tax credit as either a giveaway or a cause of continuing inflation, Bennet continues to hope for a revival.

“We now have evidence in America that people spend the money … on clothing, on rent, on food. What I hear from the families more than anything else is the degree to which it relieves stress,” the Colorado senator said in the interview.  “I think sometimes there's not an appreciation for how hard we've made it to be somebody who's working and poor in this country,” he added.

Meanwhile, individual states are continuing to pass their own child tax credits, albeit not quite at the scale of the federal version. Vermont is the latest to do so, at least at the legislative level, as lawmakers in the two houses of its state legislature have reached an agreement on a package that includes a refundable child tax credit, Vermont Digger reported last week.

The bill, which was modeled after the federal version from 2021, has been sent to the desk of Gov. Phil Scott. “The Governor hasn’t made a decision yet on the bill,” Jason Maulucci, Scott’s press secretary, told the website. “He feels that the Legislature missed an opportunity to provide broader, more impactful tax relief for Vermonters, like he proposed in January. However, he is pleased that this year, the Legislature did come around to his view that tax relief is necessary.”