One Senator Wants to Cut the IRS’ Budget in Half 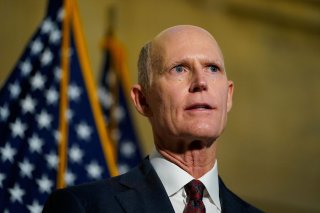 Despite the well-documented staffing and budget issues at the Internal Revenue Service (IRS), Sen. Rick Scott (R-FL) isn’t wavering from his controversial stance of wanting to cut the agency’s budget in half.

“We got to make this system where we don’t need a big IRS,” he told Business Insider. “We got to make the system simple. I mean the IRS, it’s so complex. If you can get lawyers and accountants you can figure out how to not pay taxes, it shouldn’t be that way,” he continued.

However, late last week, IRS commissioner Chuck Rettig told the House Ways and Means Committee that such extreme cuts would only cripple the agency that is already dealing with a massive backlog of unprocessed tax returns and correspondence from prior years.

“If the IRS budget was cut by 50 percent, you might be better off and save more money by just shutting it down completely,” he said. “We account for 96 percent of the gross revenue of the United States of America. How are you going to fund what we need to fund and what every American deserves? … Cutting our budget is not the right answer,” he added.

For months, Rettig and other IRS officials have partly blamed the persistent backlog on staffing issues. The commissioner previously noted that the agency is grossly understaffed, as it is working with 20,000 fewer workers than it had in 2010.

In addition, the IRS has been trying to make do with a budget that is 20 percent less than what it was in 2010, when adjusted for inflation, according to the Congressional Budget Office.

On Path to Clearing Backlog

Rettig, however, assured the committee that the agency is taking meaningful actions right now—such as hiring 10,000 new employees and creating so-called “surge teams”—to clear the backlog by the end of this year.

“As of today, barring any unforeseen circumstances, if the world stays as it is today, we will be what we call ‘healthy’ by the end of calendar year 2022, and enter the 2023 filing season with normal inventories,” he claimed.

According to its most recent release, the IRS has issued more than 45 million tax refunds worth nearly $152 billion in total. Broken down, the average refund payment comes in at $3,352, which is $537 higher than last year’s amount of $2,815.

But with the tax season deadline still about a month away, the average refund amount could still potentially change considerably.

In all, the agency has received a total of about 63.5 million tax returns and processed nearly 62 million of them.