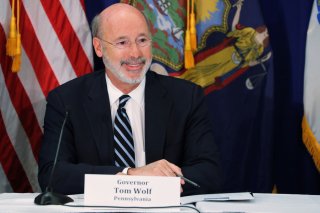 Federal stimulus checks may be a thing of the past, following the three rounds of them, across two presidential administrations in 2020 and 2021. But some states have moved forward with their own stimulus packages, including California and Colorado. At times, the stimulus checks have been paid for out of budget surpluses, some of them leftover from the CARES Act and American Rescue Plan Act.

Now, one governor of a large state is proposing another round of checks, while facing a hostile legislature.

“The cost of everything from gas to groceries is rising, and for Pennsylvanians living paycheck to paycheck that can mean painful decisions,” Wolf said in a statement. Wolf is a Democrat, while the state legislature is controlled by Republicans.

“Pennsylvanians deserve to be supported and the opportunity to thrive. Yet my Republican colleagues are sitting on more than $2 billion of support that will need returned to the federal government if they don’t pass a plan.”

The governor’s remarks were delivered at the Philadelphia Boys & Girls Club this week.

A pair of lawmakers, Senator Christine Tartaglione and Representative Brian Kirkland, appeared with Wolf at the event and announced that they plan to introduce legislation, which is called the  PA Opportunity Program.

The bill would take $500 million in already-appropriated American Rescue Plan Act funds and cut checks of $2,000 for Pennsylvania households with an income of $80,000 or less. The proposal, at a total cost of $1.7 billion, will also direct $225 million to small businesses, $204 million for direct property tax relief, $325 million for health care, and $450 million to "invest in conservation, preservation, and revitalization of Pennsylvania communities.”

“The people of Pennsylvania have proved their resiliency time after time enduring the economic hardships that the COVID-19 pandemic brought,” Sen. Tartaglione in the announcement. “Now it is time for Pennsylvania to step up and support our people, and I am excited to partner with Gov. Wolf to fight for the passage of the PA Opportunity Program. We have billions of dollars sitting in the bank, it’s time we start using it to help Pennsylvanians.”

“I’m grateful that Sen. Tartaglione and Rep. Kirkland are taking initiative to get this money into the hands of those who need it most,” Wolf added. “I’m hopeful Republican leaders will get on board and get bills for this program to my desk as soon as possible.”

This is Wolf’s final year in his second term as governor; there are contested primaries on both sides in the race to succeed him.