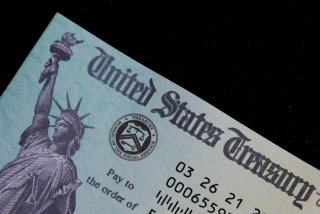 A petition has been circulating for the last several months asking that checks of $2,000 a month be sent to every American for the duration of the pandemic. And now, that change.org petition has reached another milestone.

The petition, titled “$2000/month to every American #moneyforthepeople #covid19,” has crossed the 2.4 million mark, and had reached 2,438,442 as of Monday morning. The current goal is 3 million.

“Our country is still deeply struggling. The recovery hasn’t reached many Americans—the true unemployment rate for low-wage workers is estimated at over 20% and many people face large debts from last year for things like utilities, rent and child care,” the petition says.

“These are all reasons that checks need to be targeted to people who are still struggling and that Congress needs to learn from this past year. It took nine months for Congress to send a second stimulus check, and just moments to spend it. Moving forward Congress needs to make recurring checks automatic if certain triggers are met. No more waiting around for our government to send the help we need. Sign to join our movement to get recurring checks to the people.”

It doesn’t appear, however, that Congress will heed the call of the petitioners for a fourth round of stimulus checks.

Congress passed three rounds of stimulus checks since the start of the pandemic, including two rounds in 2020 and an additional one, in the American Rescue Plan Act, earlier this year.

There are few indications now that an additional round of checks on the way, at least not this year.

President Joe Biden and Congress are currently negotiating over infrastructure, but an additional round of stimulus checks is not part of any package currently on the table in those talks.

In addition, the president has not included additional stimulus checks in his proposed federal budget, and the White House Press Secretary has repeatedly indicated that the Administration is not prioritizing additional checks going forward.

While multiple letters have been written by groups of Democratic members of Congress proposing additional stimulus checks, it doesn’t appear that such measures would have the votes to pass both houses of Congress, and especially not to overcome a Senate filibuster.

In the meantime, the first checks from the expanded child tax credit will go out beginning on July 15. Biden has proposed making that expanded credit extended through 2025, as part of what he calls the American Families Plan.