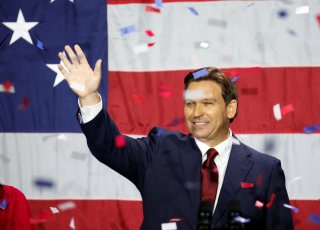 The poll results follow a week of simmering tension between Trump and DeSantis, as the Florida governor enjoyed his landslide reelection victory and many of Trump’s handpicked candidates failed to win their respective election bids.

On Wednesday, Trump posted a rhetorical question on social media seemingly targeting DeSantis. “[S]houldn’t it be said that in 2020, I got 1.1 Million more votes in Florida than Ron D got this year ... Just asking?” Trump wrote on Truth Social.

Trump on Thursday also posted: “The Fake News asks him if he’s going to run if President Trump runs, and he says, ‘I’m only focused on the Governor’s race, I’m not looking into the future.’ Well, in terms of loyalty and class, that’s really not the right answer.”

DeSantis has yet to officially announce a 2024 campaign for the nation’s highest office but Trump has confirmed that he has a “very big announcement” coming on Tuesday. However, some of the former president’s closest allies are now calling on him to delay his planned announcement due to the Georgia runoff between incumbent Sen. Raphael Warnock (D-GA) and former football star Herschel Walker.

The Hill reported that New Hampshire’s Republican governor Chris Sununu, who won his reelection on Tuesday, called the prospect of Trump jumping into the presidential race so early a “silly decision.”

“He stands to potentially muck up the opportunity for Walker to win in Georgia in his runoff,” Sununu said Friday in a SiriusXM interview. “I think what the former president doesn’t understand is if he announces … he’s not going to keep anyone out of the race. But no one else is going to announce until summer or fall for a whole variety of fundraising reasons and all of this. So it’s going to be a very awkward thing with only him in the race. No one’s going to really care. It’s just going to be weird.”