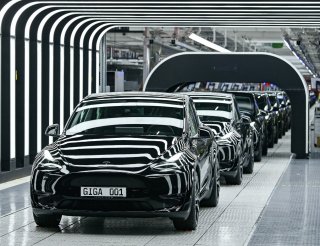 Much like the ongoing pain at the pump, American consumers are also feeling the sting of rising costs in the red-hot car market.

Per CNBC, according to May data from Edmunds.com, the monthly costs to finance a new vehicle—at 5.1 percent over 70.5 months—now average $656. Meanwhile, for used cars—at 8.2 percent over 70.8 months—the average monthly payment now sits at $546. Compared to last year, new car prices are up 12.6 percent and used car prices 16.1 percent, according to the latest data from the U.S. Bureau of Labor Statistics.

Unfortunately for many looking to purchase a vehicle in the coming months, it will likely get even pricier due to the Federal Reserve hiking interest rates seventy-five basis points earlier this week. Another sizable rate increase could be coming next month.

Potential car buyers received more bad news this week when Tesla announced that it would increase the prices of all its vehicles in the U.S. amid supply chain issues.

Tesla CEO Elon Musk warned during the company’s first-quarter earnings call in April that prices were rising across the board for materials and components but that it had locked in pricing with suppliers for at least the short term.

However, consumers received some good news recently when it was announced that the 2023 Chevrolet Bolt EV and EUV will start well below the $30,000 price tag.

“This now makes the Bolt the cheapest EV in America, undercutting the 2023 Nissan Leaf, which starts at $28,425,” the magazine writes. “The Leaf does still qualify for federal tax credits, which dramatically drops the price, but Nissan is expected to hit the 200,000-vehicle cap later this year that General Motors already has.”

Production of the 2023 Bolt EV and EUV will begin later this summer.