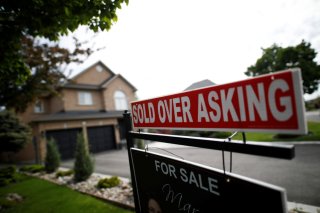 There’s no doubt that many Americans who had their sights set on purchasing a home in 2022 have been left disappointed due to ever-climbing home prices and mortgage rates.

However, as reported by CNBC, there is finally some good news on the horizon: the supply of homes for sale could slowly increase over the next few weeks, according to the latest data released by Realtor.com. This increase could potentially moderate prices, which have surged nearly 20 percent over the past year, in the current red-hot housing market.

CNBC’s report noted that housing inventory was 12 percent lower in April 2022 compared to the same month last year—the smallest year-over-year decline since 2019. A reading for April’s final week showed that inventory was down only roughly 3 percent from last year.

“April data suggests a positive turn of events is on the horizon for weary buyers: If the trends we’re seeing now hold true, we could potentially see year-over-year inventory growth within the next few weeks,” Danielle Hale, chief economist for Realtor.com, said in a release.

“The key to this growth will be the continuation of softening buyer competition and an increasing number of sellers putting homes on the market. While home shoppers are still seeking relief from record-high asking prices and all-time low supply, when compared to the past two-plus years of double-digit annual inventory declines, an imminent rebound is welcome news—a real estate refresh, if you will. There's a long uphill climb to balance, but it starts with heading in the right direction, and April data shows a lot of promise,” she continued.

In a recent op-ed for CNN Business, Jeff Tucker, a senior economist on the economic research team at Zillow, shared similar sentiments, saying that “we’re finally starting to see the early signs of a cooling housing market.”

He continued: “This will be a much-needed rebalancing from the unhealthy market conditions we see today. That is especially good news for first-time buyers. … Competition and overall demand remain incredibly resilient, and will continue to be, thanks to the huge share of millennials reaching peak home-buying age, and a decade of underbuilding that's left us more than one million homes away from meeting demand. There are millions of stymied first-time buyers waiting in the wings for the opportunity to snap up a home when and if competition finally starts to let up.”

Against such market conditions, Tucker claimed that slowing price growth, also driven by fast-rising mortgage rates, should be seen positively.

“Mortgage rates, which have hovered at record lows the past two years, recently passed 5 percent, pushing the monthly payment on a typical home up by almost 20 percent in just the past three months, and 38 percent more than it was a year ago,” he explained.

“While that might feel like adding insult to injury to home shoppers who are stretching their budgets and still losing out, there are early signs rising rates are helping to slow the market. … Further, annual home value growth should peak this spring, and could be closer to 10 percent than to 20 percent by next spring. That would provide buyers—especially first-time buyers—a bit of relief, even though double-digit home value growth is still incredibly high by historical standards,” he concluded.