Remember the Debt Ceiling Crisis? It Might Happen All Over Again. 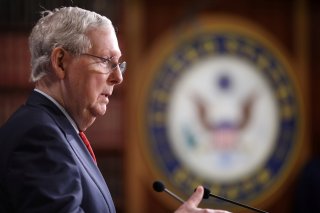 The Treasury Department on Wednesday pressed Congress to ramp up efforts to boost or suspend the federal debt limit, warning that the department is uncertain whether it could prevent the federal government from running out of cash.

“If Congress has not acted by July 31, Treasury, as it has in the past, may take certain extraordinary measures to continue to finance the government on a temporary basis,” Brian Smith, Treasury’s deputy assistant secretary for federal finance, said. “In light of the substantial Covid-related uncertainty about receipts and outlays in the coming months, it is very difficult to predict how long extraordinary measures might last.”

Congress passed a two-year budget deal in 2019 that suspended the legal limit on the debt ceiling until July 31. The agreement was put in place for lawmakers to refer to over budgetary battles and to offer a deeper understanding over spending amid a presidential election year. But a Democrat-controlled Congress must ensure that the Treasury is stable and that the government can continue to fund their big-spending proposals.

In the past, when the White House and Congress couldn’t reach a deal over the debt limit, the Treasury had the ability to avert a default on the national debt by reallocating payments and other needs until the suspension or limit increased. These measures could last for months on their own.

But with a seething economic crisis jabbing at the nation, the Treasury cautioned that it doesn’t know how long it could maintain its traditional tools for preventing economic calamity.

“Treasury is evaluating a range of potential scenarios, including some in which extraordinary measures could be exhausted much more quickly than in prior debt limit episodes,” Smith said.

Once the measures are exhausted, that could mean bondholders, Social Security beneficiaries and veterans won’t see their monthly payments from the Treasury. Such a circumstance, which has never occurred, could have detrimental impacts on the future of the economy.

That puts a lot of pressure on Congress to act sooner than expected, as lawmakers are scheduled to leave for summer recess at the end of July until September.

Congress is confronting yet another deadline around the same time, when government funding is slated to expire at the end of September and the fiscal year. If negotiations among lawmakers hit a brick wall, then that puts the federal government at risk of a shutdown.

When asked whether Treasury was prioritizing payments if Congress can’t strike a deal over the federal borrowing limit, Smith responded, “Congress needs to raise or suspend the debt limit, that’s the way to resolve this issue.”

The department’s comments come as it announced it plans to borrow more than $1 trillion for the remainder of the fiscal year to help pay for pandemic-related needs. That borrowing would bring the total for the fiscal year ending Sept. 30 to $2.3 trillion, much less than the $4 trillion spent in the last fiscal year when the deadly disease shocked the U.S.