Republican Representative Pushes for $1,000 ‘Stimulus’ to All Americans 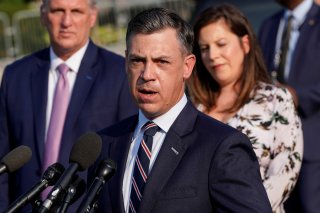 As reported by Newsweek, the lawmaker told Fox News on Friday that the roughly $40 billion in aid that has been approved by the House could instead be tapped into to issue $1,000 to each American.

“That's $1,000 for every single American is the equivalent of $40 billion,” Banks said. “And with what's going on in America right now, I'd rather be helping Americans get back on their feet than sending money abroad with no strings attached to foreign countries,” he continued.

However, Newsweek noted that “the cost of giving each American $1,000 would be significantly higher than $40 billion. The population is currently more than 332.6 million, according to the U.S. Census Population Clock. That would mean a cost of more than $332.6 billion.”

If $40 billion were divided up evenly among Americans, each individual would be in line to receive approximately $120.

While Banks’ push to use Ukraine aid in this manner likely won’t make much headway, there are several states that have already proposed their own version of tax rebates and stimulus checks to help ease the burden of red-hot inflationary pressures seen across the nation.

For example, in Colorado, Gov. Jared Polis announced last month that millions of Coloradans are expected to receive a $400 payment this summer via the Colorado Cashback program. Now, it was recently reported that check could potentially increase to $500 per individual.

Meanwhile, Missouri taxpayers could also receive a one-time refund of up to $500 per individual under a plan endorsed by state senators. The money, though, will be limited to taxpayers earning $150,000 or less or $300,000 for a married couple. In Hawaii, a rebate program will send out $300 to taxpayers earning less than $100,000 per year and their dependents. For those who earn more than six figures annually, they will receive $100.

Furthermore, the Georgia Department of Revenue will begin issuing special, one-time tax refunds that were part of House Bill 1302 that Gov. Brian Kemp recently signed into law. The measure calls for single filers and married individuals who file separately receiving up to $250, while head of household filers could get their hands on a maximum of $375. Meanwhile, married individuals who file joint returns are in line to get up to $500.

“Due to years of responsible, conservative budgeting and our measured reopening that prioritized protecting both lives and livelihoods, Georgia is in a position to issue these one-time refunds,” Kemp said in a statement. “As hardworking Georgians face rising inflation caused by failed federal government policies, we are doing what we can to provide relief by returning their money back into their pockets.”