The Revenge of Jeb Bush 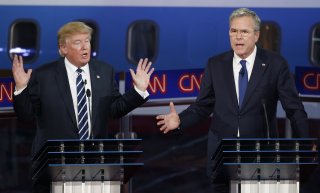 Will this be the year that Jeb Bush gets his revenge? In 2016, the former Florida governor and Bush dynasty heir apparent famously dubbed Donald Trump the “chaos candidate.” The moniker had its merits, but this desperate swing packed less of a punch than “Low Energy” Jeb. Trump voters were hoping to inject some disruption, maybe even a little chaos, into the political system and safe establishment alternatives like Bush badly misread the moment.

Bush’s warning to the Republican primary electorate seems more prescient now. More than riots, the pandemic, or the economy, President Trump’s volatility poses the main threat to his reelection. At a time of crisis, the American people look for a steady hand to provide calm, reassuring leadership. Trump is constitutionally incapable of providing it, as he is far better equipped to rally his supporters and assail his foes. But that may not be what the public wants right now and it is the main thing a more conventional candidate, even the well past his prime Joe Biden can at least claim to offer.

Trump isn’t done yet. The coronavirus crisis appears to be stabilizing and perhaps a second wave can be mitigated or avoided entirely before the election. The economy could improve, at least to the point where voters feel it is moving in the right direction, and recovery may already be on the way. Whatever the long-term political implications of George Floyd’s death in Minneapolis police custody, the biggest demonstrations and certainly the worst riots are likely to be over by the time Americans head to the polls.

Given that all these problems currently still exist, however, it is no surprise that Trump lags behind Biden in the polls. Even an otherwise dismal NBC News/Wall Street Journal poll taken during the recession finds Trump with double-digit leads over Biden on “cutting the unemployment rate” and “dealing with the economy,” with 48 percent preferring the incumbent president to handle these issues.

A plurality of Americans appears to understand that the contraction is largely due to steps taken to arrest the spread of the coronavirus. The Democrats are criticizing Trump for not locking down the economy earlier and pushing to keep it locked down longer.

But if months of the coronavirus and civil unrest have conditioned a majority to decide the country needs more stable leadership than the “very stable genius” they see on Twitter provides, there is no recovery that can save Trump. He is who he is, and scarcely anyone thinks he can change now.

When Trump talks tough (see “when the looting starts, the shooting starts”) he is seen as dark and divisive in times that require unity. When Trump tries to project positivity, he is seen as Pollyannaish and out of touch. Consider his Rose Garden comments about the opportunity for racial equality created by the Floyd protests, which were largely misreported as him saying a dead black man was happy about the newly released jobs numbers.

Aside from the early phases of the federal coronavirus response, it is not clear that Trump’s specific actions coping with these problems are especially unpopular. Some polling has found majority support for a military role in riot suppression in the country, even if it is a radical position inside the New York Times newsroom. Trump has not attempted to defend the Minneapolis police officers’ treatment of Floyd while also declining to attribute it to systemic racism in law enforcement. The public is more cautious than Trump about economic reopening, but bluster aside the president has largely followed medical advice and done little to interfere with the states that are proceeding more gradually.

Still, Trump’s frequent outbursts online and in person at press conferences have made his leadership seem less decisive, and less focused on the most urgent national matters at hand. The problems with his temperament that the Never Trumpers have inveighed against almost as much as his modest departures from neoconservative foreign policy have shone through. They are a clear and present danger to his reelection.

The unfortunate reality is that the country needs a civic nationalism right now that only Trump seems willing to defend. Biden and the party he may soon lead to unified control of the federal government have responded to the tragic events unfolding all over America by simply trying to appease the loudest activist voices. And another Bush may soon claim vindication as a result of Trump’s character flaws even as Bush Republicanism remains wholly unsuited to dealing with our most pressing national challenges.

W. James Antle III is the politics editor of the Washington Examiner.