Rising Mortgage Rates Are Pushing Homebuyers Out of the Market 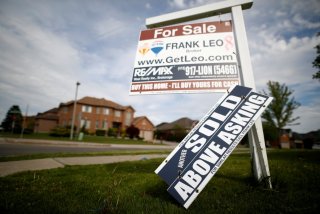 For many potential homebuyers trying to navigate this cutthroat market, it is surely a huge understatement to say that the U.S. housing market is running hot.

Realtor.com’s latest housing trends report indicates that the national median home price notched a record high of $405,000, which is up 13.5 percent from the year before. And compared to the start of the pandemic in March 2020, the median home price is up a whopping 26.5 percent. According to Fortune, “home shoppers are engaging in bidding wars at the highest clip ever recorded.”

Despite the seemingly never-ending rise in home prices, there might finally be some signs of slight cooling in the market.

“Fewer people are starting online home searches and applying for mortgages than this time last year, and year-to-date growth in home tours remains far below 2021 levels. An increasing share of sellers are also reducing their prices after putting their homes on the market,” Redfin researchers wrote in a report.

“The market still feels hot, but a slowdown in online searches, home tours, and mortgage applications suggests more buyers are getting priced out,” it added.

One of the major reasons why some homebuyers are dropping out of the market is fast-rising mortgage rates, which now sit at 4.84 percent for the popular thirty-year mortgage, according to Mortgage News Daily. It was just a month ago when that rate was 3.89 percent, and back in December, it was 3.11 percent.

Redfin researchers noted that “mortgage rates are shooting up at the fastest pace in history, sending the typical monthly mortgage payment for a homebuyer up more than $500 since the beginning of this year.”

“As rates quickly approach 5 percent, we expect their impact on homebuyer demand to change from a motivator—driving a sense of urgency to buy before rates rise further—to a deterrent,” it continued.

Per MarketWatch, some experts are now predicting that rates will eventually surpass the psychologically important 5 percent mark.

“While rates got very close, reaching as high as 4.94 percent in November 2018, they did not reach 5 percent, according to data from Freddie Mac,” said Danielle Hale, chief economist at Realtor.com. “Even if rates slow their recent pace of increase, they’re likely to hit 5 percent by mid-year unless something big changes in the outlook.”

Jeff Ostrowski, an analyst at Bankrate, offered an even more pessimistic tone. “It’s quite possible that the upward trend will continue and that the rate will hit 5 percent sometime this spring,” he told MarketWatch.