Robert E. Lee Monument to be Melted Down 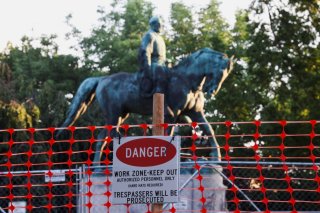 The removal of Confederate monuments and memorials around the United States has continued. Many supporters of their removal argue that the vast majority were built during the era of Jim Crow laws, from 1877 to 1965, and claim that the statues serve to memorialize an unrecognized, treasonous government. The statue's opponents also lay claim that they were a symbol meant to intimidate African Africans in the years following the Civil War.

The first of the Confederate statues to be removed was in 2015, an event that later prompted the "Unite the Right" rally against the removal of the Robert Edward Lee statue in Charlottesville in August 2017. That event turned violent, but in the process spurred a movement to remove such symbols of the Confederacy.

In the past, the case had been made that such monuments and statues should be preserved in a museum or historical institution, where they could be displayed in proper context.

Now a very different fate awaits the Robert E. Lee Monument from Charlottesville, Virginia. Since its removable last summer, the city has sought a new owner for the 1,110-pound monument that served as a focal point for that rally. Six proposals had been submitted to Charlottesville from arts groups, historical societies, and even individuals—with offers as much a $100,000 for the Lee statue and a toppled monument to fellow Confederate General "Stonewall" Jackson.

Now it looks like it will be melted down.

History and Future of the Robert E. Lee Monument

The bronze equestrian statue of the Confederate general and commander of the Army of Northern Virginia, on his horse named Traveller, had been commissioned in 1917 and was dedicated in 1924. In 1997, it was even listed on the National Register of Historic Places.

The movement to take down the famous statue began in 2015 with a petition crafted by then high school student Zyahna Bryant.

In February 2017, as part of the movement for the removal of Confederate monuments and memorials, the Charlottesville City Council voted three to two for its removal.

Now it seems that after years of attempts to find a new owner, the City Council has voted four to zero to instead hand over the bronze statue to the only local bidder: the Jefferson School African American Heritage Center. The Black-led museum proposed that the bronze be melted down and repurposed as part of its "Swords Into Plowshares" program.

In a video posted to YouTube, Andrea Douglas, the museum's executive director, said the goal was "to create something that transforms what was once toxic in our public space into something beautiful and more reflective of our entire community's social values."

According to The Washington Post, artists will consult Charlottesville residents in the coming months, including via forums early in the New Year, to determine what the actual public art could end up looking like. Douglas added that she hopes that such a collaborative process could also be used as a framework for other communities that are debating what to do with toppled Confederate monuments.