Sanders and Warren Propose Plan to Save Social Security 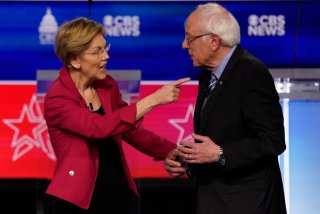 This week, the Social Security Administration (SSA) released its annual Trustees Report, which estimated that the main Social Security trust feed will be able to sustain full benefits through 2034, is a year later than last year’s report estimated. However, past that date, the agency will only be able to pay out partial benefits unless Congress does something to adjust how the program works.

The question of what Congress can do has been a complicated one. Rep. John Larson of Connecticut has proposed different versions of his Social Security 2100: A Sacred Trust plan over the years, although the current version has not gotten momentum in Congress. Meanwhile, Social Security has been far from the forefront of frequently discussed political issues.

On Thursday, that appeared to have changed when some prominent senators introduced an ambitious new plan to expand Social Security’s solvency far into the future.

A group of senators, including former Democratic presidential candidates Sen. Bernie Sanders (I-VT) and Sen. Elizabeth Warren (D-MA), introduced the Social Security Expansion Act which, per Senator Sanders’ website, “would expand Social Security benefits by $2,400 a year and fully fund it for the next 75 years past the year 2096 – all without raising taxes by one penny on over 93 percent of American households.”

The sponsors released a letter from the SSA’s chief actuary.

“We estimate that enactment of these provisions would extend the ability of the OASDI program to pay scheduled benefits in full and on time throughout the 75-year projection period. The date of projected depletion of the combined OASI and DI Trust Fund reserves is 2035 under the intermediate assumptions of the 2022 Trustees Report,” the letter from Chief Actuary Stephen Goss said.

“At a time when half of older Americans have no retirement savings and millions of senior citizens are living in poverty, our job is not to cut Social Security,” Senator Sanders said. “Our job must be to expand Social Security so that every senior citizen in America can retire with the dignity they deserve and every person with a disability can live with the security they need.”

This will be done, Sanders said, by “demanding that the wealthiest people in America finally pay their fair share of taxes.”

The legislation does not appear to have been endorsed by the White House. There is also some skepticism that it can pass.

“This bill has no chance whatsoever of receiving a single Republican vote in either House,” said Sen. Mitt Romney (R-Utah) said, per CNBC. “So it will not be passed.”