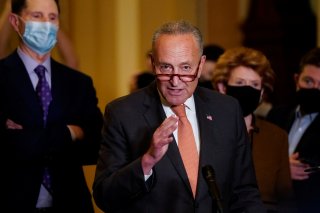 Democratic leaders on Capitol Hill have secured a deal with the White House on the funding of their proposed $3.5 trillion spending bill, solving a major sticking point preventing the agreement from proceeding.

“The White House, the House, and the Senate have reached agreement on a framework that will pay for any final negotiated agreement,” Senate Majority Leader Chuck Schumer (D-NY) announced at a press conference on Thursday afternoon.

Speaker of the House Nancy Pelosi (D-CA) also celebrated the agreement on Thursday, underlining that, while there had been broad support for the bill’s proposals, it had still been necessary to resolve the issue of how to pay for them.

Earlier in the week, President Joe Biden hosted Democratic leaders from various factions within the party at the White House to reach a compromise on the bill’s prospective funding.

The Biden administration had earlier celebrated the Senate’s approval of a roughly $1 trillion bipartisan infrastructure bill as a significant achievement, and proof that the administration was able to make bipartisan compromises when needed. However, Democrats on Capitol Hill also proposed the $3.5 trillion bill, which contained many of the provisions that Republicans had negotiated out of the smaller bill. Rather than attempt to pass the larger bill through normal channels—an attempt which would certainly end in failure, given Republican threats of a filibuster—Democrats indicated that they would move it through the Senate via “reconciliation,” a procedural mechanism that prevents filibusters.

This arrangement has separately caused concern on both the left and right wings within Congress. Rep. Pramila Jayapal (D-WA), the leader of the Congressional Progressive Caucus, threatened to lead dozens of House Democrats to defect and vote against the smaller bill if the larger one was not passed first, fearing that moderate Democrats would pass the smaller bill but decline to support the larger one.

Conversely, House Minority Leader Kevin McCarthy (R-CA) argued that because the items removed from the smaller bill were simply included in the larger bill, the smaller bill could no longer be considered a bipartisan bill, and indicated that he would vote against it. However, it appears that House Republicans will be unable to block the smaller bill, as it has already passed the Senate and cannot be filibustered in the Democratic-majority House.

Even so, last-minute disagreements have led to renewed uncertainty about the timeline of the two bills’ passage. On Wednesday, Pelosi suggested to reporters that the reconciliation would come up for a vote on Monday, September 27; the following day, she declined to commit to the same timeline, citing delays.

However, she described the reconciliation bill as being in a “very good place.”