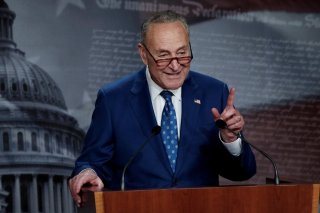 Senate Majority Leader Chuck Schumer (D-NY) has confirmed that he intends to hold a vote “in the coming weeks” on a bill to codify same-sex marriage into federal law, according to a new Politico report.

“A vote on marriage equality will happen on the Senate floor in the coming weeks,” Schumer told reporters on Wednesday.

“And I hope there will be ten Republicans to support it,” he continued.

The House of Representatives passed legislation in July to protect same-sex marriage, with support from forty-seven Republicans.

As reported by CNN, Baldwin stated that they are “darn close” to getting the ten Republicans on board. Asked if the measure could come to the floor before the upcoming midterm elections, Baldwin said, “Oh, absolutely.”

“I think we should have a vote sooner rather than later,” she added.

To gain even more GOP support, Collins and Baldwin are working on an amendment that wouldn’t affect religious liberty or conscience protections.

“We are listening carefully to the concerns that have been raised by some of our colleagues,” Collins said on Wednesday.

“And we’re looking at an amendment that would strengthen the language in the bill to make crystal clear that it does not in any way infringe upon religious liberty. And it also would correct a drafting error,” she added.

Sen. Ron Johnson (R-WI), who had previously hinted that he would vote in favor of a bill codifying same-sex marriage, said on Wednesday that he cannot support the bill as it is currently written.

“There have been very serious issues raised about religious liberty, and I’ll take those seriously,” he told CNN.

“I don’t think government should play any role whatsoever in sanctioning what for, you know, hundreds of millions of Americans are a religious sacrament,” he said.

“But that’s not the choice I’ll be offered if this comes before the Senate. I do understand that. And so I haven’t made up my final mind about any legislative text, because I don’t think the text has been finalized and because I’m still consulting with my constituents on this matter,” he concluded.