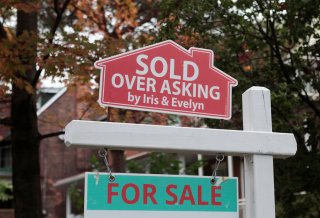 While rising mortgage rates could potentially throw some cold water on the red-hot housing market, there is no indication that the housing inventory will increase to pre-pandemic levels anytime soon.

And that will likely keep listing prices trending higher, pricing out many first-time homebuyers. Real estate experts polled in the latest Zillow Home Price Expectations Survey acknowledged that the housing inventory won't return to a monthly average of at least 1.5 million available units until the end of 2024.

“We are seeing new listings returning to the market, slowly, as we enter the hottest selling season of the year, but this supply deficit is going to take a long time to fill,” Zillow’s senior economist, Jeff Tucker, told Fox Business.

“Inventory and mortgage rates will determine how far and how fast home prices will rise this year and beyond,” he continued.

The S&P CoreLogic Case-Shiller U.S. National Home Price Index showed that home prices climbed 19.2 percent in January year-over-year—up from an 18.9 percent annual increase seen in December. Meanwhile, Realtor.com’s latest Monthly Housing Trends Report has revealed that the national median home price notched another record high of $405,000, which is up 13.5 percent from the year before.

Experts surveyed by Zillow are projecting median prices to rise another 9 percent this year and about 27 percent over the next five years.

Fox added that “the most bullish respondents expect home price gains of 46.5 percent by the end of 2026, while conservative estimates predict a 10.3 percent rate of appreciation in that time.”

Slight Cooling in the Market?

However, according to Redfin, many potential homebuyers are already seeing a slight cooling of the market, as mortgage rates have crossed the psychologically important 5 percent level and there has been an uptick in new listings. The real estate brokerage site noted that about 12 percent of homes for sale saw a drop in price during the four weeks ending on April 3. That figure is up by 9 percent compared to a year ago.

“Price drops are still rare, but the fact that they are becoming more frequent is one clear sign that the housing market is cooling,” Daryl Fairweather, Redfin’s chief economist, said in a release.

“It goes to show that there’s a limit to sellers’ power. There is still way more demand than supply, and buyers are still sweating, but sellers can no longer overprice their home and still expect buyers to clamor at their door. That’s because higher mortgage rates are eating into homebuyers’ budgets. As the cooldown continues to set in, it is important that sellers price their home carefully,” she concluded.