Senate Democrats Are Preparing to Fight for the Child Tax Credit 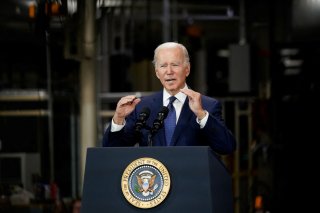 The enhanced child tax credit was a policy idea that made it into the American Rescue Plan Act that was passed in the early months of the Biden administration. It brought direct payments to nearly all American families in each of the last six months of 2021.

The credit succeeded in its stated goal of reducing child poverty. However, it also ended at the end of 2021, when the original Build Back Better legislative package failed to pass the Senate. And while several remnants of Build Back Better were resurrected earlier this year for the Inflation Reduction Act, the credit was not one of them.

According to one report, there is some renewed optimism about a possible revival of the credit in some form.

CNBC reported on “new optimism” from supporters that the policy could see a return.

“No more tax breaks for big corporations and the wealthy unless the child tax credit is with it,” Sen. Sherrod Brown (D-OH), who had backed the credit for years before it passed, said in an interview this fall. “And I will lay down in front of a bulldozer on that one.”

“I feel better about it than I have at any point in 2022,” Adam Ruben, campaign director at the Economic Security Project, told CNBC.

He pointed at recent comments by President Joe Biden at the White House Conference on Hunger, Nutrition, and Health, where he made clear it was still his administration’s policy to bring back the 2021 version of the credit.

“Overwhelmingly, working families used the Child Tax Credit to buy food and other basic needs for their families.  And it helped cut child poverty by nearly 50 percent in the United States—50 percent… And it cut food insecurity for families by 26 percent,” the president said at that summit, per the White House’s transcript.

“The expanded Childcare Tax Credit is one of the most effective programs we’ve ever seen.  And that’s why my national strategy calls on Congress to expand the Child Credit permanently.”

It’s not clear, however, what the path is to get the expanded child tax credit through Congress. Sen. Joe Manchin (D-WV) is a known opponent of the policy, and without his support, there are not fifty votes for it in the Senate. Rising inflation, and the perception among some that government benefits during the pandemic contributed to it, might also make passage less likely.

There's a chance that the policy could pass if the Democrats manage to hold the House and gain a larger Senate majority in the next Congress, but those are both huge ifs.