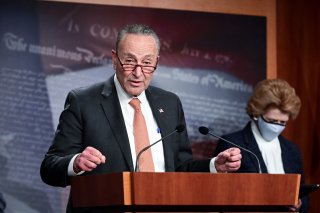 On Thursday, the Senate postponed voting on a bill that aims to codify same-sex marriage into federal law until after the midterm elections, according to a new Politico report.

“I’m still very confident that the bill will pass but we will be taking the bill up later, after the election,” Sen. Tammy Baldwin (D-WI), the bill’s chief sponsor, said after a Democratic caucus lunch.

Over the past week, Baldwin and Sen. Susan Collins (R-ME) have been working on an amendment that wouldn’t affect religious liberty or conscience protections and to garner sixty votes, including those of ten Republicans, necessary to pass their bill. They have been in discussions with Sens. Rob Portman (R-OH), Thom Tillis (R-NC), and Kyrsten Sinema (D-AZ) to discuss the legislation’s future path.

Senate Majority Leader Chuck Schumer (D-NY) said on Thursday that he is “glad to give them space to lead these negotiations, because this needs to be done and done right.”

As reported by CNN, Baldwin expressed concern that midterm politics complicate her ability to reach a deal on the measure.

“I think that we were ready to push for a vote for this right after the House voted overwhelmingly, in a bipartisan manner, to advance this,” she said, referencing how the House of Representatives passed the bill in July 267 to 157, with support from forty-seven Republicans.

“But now we’re getting ever closer to a certain date in November, and I think that’s a new factor,” she continued.

Baldwin expressed confidence that there could be ten Republicans who support the final bill, but she was less confident she could land ten to break a filibuster.

“I think the problem we have right now is that I think there are ten on final passage, but we need cooperation on procedural votes before we get there,” she said.

Meanwhile, Politico reported that some Republicans pushed for a delay on the same-sex marriage vote.

“There’s a lot of complex issues that have not been resolved. And we haven’t even seen text ... it does seem that the scheduling has been driven by Sen. Schumer’s political ambitions, rather than an attempt to get an outcome,” Sen. Pat Toomey (R-PA) said on Wednesday. “I don’t think it’s constructive to have a vote on Monday.”

Portman added that he doesn’t “think we have the votes yet.”

“I don’t want to move ahead unless the votes are there,” he continued. “I’m still talking to people. Others have been more optimistic, but people need some time.”