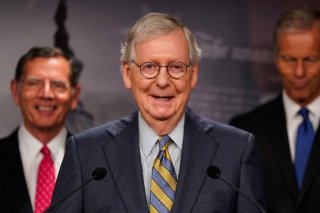 A day after the House of Representatives passed a bill protecting same-sex marriage rights, CNN has reported that Republican and Democratic senators confirmed on Wednesday that they expect the legislation to garner the sixty votes needed to break a filibuster.

The Respect For Marriage Act, which passed the Democratic-controlled chamber 267 to 157, with support from forty-seven Republicans, establishes that a marriage is considered valid under federal law if it was legal in the state where it was performed. It also bars anyone from denying “full faith and credit” to an out-of-state marriage based on sex, race, ethnicity, or national origin, regardless of any individual state’s law.

While most Republican senators are likely to vote against the bill, some lawmakers believe that there will be at least ten Republicans who would join all fifty Democrats in advancing the legislation. One such Republican is Sen. Thom Tillis (R-NC), who told CNN that he “probably will” vote for the bill.

Meanwhile, Republican Whip John Thune (R-SD) acknowledged that he expects the legislation will have strong Republican support in the Senate.

“If and when [Democrats] bring a bill to the floor, we'll take a hard look at it,” said Thune, who has yet to decide on the legislation.

“As you saw there was pretty good bipartisan support in the House yesterday and I expect there'd probably be the same thing you'd see in the Senate,” he continued.

Senate Minority Leader Mitch McConnell (R-KY) said Tuesday that he would “delay announcing anything on that issue until we see what the majority leader wants to put on the floor.”

Senate Majority Leader Chuck Schumer (D-NY) noted during a floor speech that he was “really impressed by how much bipartisan support it got in the House.”

“I want to bring this bill to the floor. And we're working to get the necessary Senate Republican support to ensure it would pass,” he added.

According to ABC News, President Joe Biden said he also wants the Senate to take up the bill quickly. There is some concern that the Senate's legislative calendar is too full to take up the legislation before a month-long recess that starts on August 5.

“We need this legislation, and we urge Congress to move as quickly as possible,” White House press secretary Karine Jean-Pierre said aboard Air Force One on Wednesday. “It's something the vast majority of the country support, just like they support restoring Roe [v. Wade], stopping a national abortion ban and protecting the right to use contraception.”