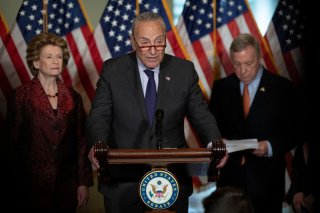 The three Democrat senators have been leading the effort to cancel $50,000 of student loan debt per borrower. Biden, however, has indicated that he likely won’t go over $10,000 per borrower. The White House has also signaled that individuals making more than $125,000 a year would likely be ineligible.

“I’m pushing him to do this in a way that we help the Georgia folks I’m running into every day,” Warnock told the news outlet, adding that the president “is receptive to getting this done.”

Warren later told reporters, “I want to see the maximum amount of debt relief possible. Fifty thousand dollars would give immediate relief to tens of millions of families.”

Per CNN, White House press secretary Karine Jean-Pierre noted on Wednesday that Biden has not decided about student debt forgiveness but added that the president “values” the perspectives of the senators working on the issue.

Since taking office, Biden has taken several actions to provide student loan relief. He has repeatedly extended the pause on federal student loan repayments and has already canceled more than $17 billion in student loan debt for about 725,000 borrowers.

According to the Federal Reserve Bank of New York data, student loan debt hit another all-time high of $1.59 trillion in the first quarter of 2022—a $14 billion increase from the fourth quarter.

Meanwhile, as reported by Insider, Sen. Mitt Romney (R-UT) and several of his Republican colleagues introduced a bill—called the Student Loan Accountability Act—that would prohibit the Biden administration from broadly canceling the student loan debt. The legislation, however, would include exemptions for student loan forgiveness, cancelation, and repayment programs that are already in effect.

“It makes no sense for the Biden Administration to cancel nearly $2 trillion in student loan debt. This decision would not only be unfair to those who already repaid their loans or decided to pursue alternative education paths, but it would be wildly inflationary at a time of already historic inflation,” Romney said in a release.

“Democrats and Republicans alike have called on the President to not take this unwise step and pile more onto our $30 trillion national debt. And while the President’s legal authority in forgiving this debt is dubious at best, our bill would ensure that he would be prevented from taking action,” he continued.