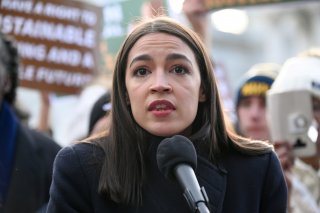 President Joe Biden unveiled a $2.25 trillion infrastructure spending measure this week that aims to build up the nation’s roads and bridges, reduce carbon emissions and mitigate the housing crisis, and if passed, the bill would largely be funded by tax hikes on corporations.

The package has received loads of pushback from Republicans who balk at raising taxes and who reject widespread spending after Congress passed a $1.9 trillion coronavirus relief package that was starkly partisan.

Rep. Alexandria Ocasio-Cortez (D-N.Y.), however, thinks the White House’s infrastructure plan should be more than quadrupled.

“The vision that President Biden and the administration has laid out ... has surprised a lot of us in a positive way and in the detail and the thought that’s here, the scope of it, is really encouraging,” Ocasio-Cortez told MSNBC’s Rachel Maddow.

But to “realistically” handle America’s infrastructure, jobs and climate change issues, Ocasio-Cortez said that the country needs $10 trillion over 10 years to “create tens of millions of good union jobs in this country, that can shore up our health care, our infrastructure, our housing, and doing it in a way that draws down our carbon emissions.”

“I know that may be an eye-popping figure for some people, but we need to understand that we are in a devastating economic moment. Millions of people in the United States are unemployed. We have a truly crippled health care system and a planetary crisis on our hands, and we’re the wealthiest nation in the history of the world. So we can do $10 trillion,” she said.

Ocasio-Cortez’s comments come after a group of progressive Democrats swirled a new bill that would invest $10 trillion in renewable energy, green infrastructure and climate justice initiatives over the next ten years.

Titled the Transform, Heal and Renew by Investing in a Vibrant Economy (THRIVE) Act, the measure outlines ambitious changes to the federal infrastructure and establishes a goal of 100 percent zero-carbon electricity by 2035, zero emissions from new buildings by 2025, and extending clean public transit options to the majority of Americans by 2030. The plan would also mandate Congress to direct spending toward those targets.

“We are lagging behind other developed nations in terms of infrastructure. So, any investment in infrastructure is more than welcome. It will help to sustain productivity growth in the future,” Pablo Guerron, an economics professor at Boston College, said. “Due to very low interest rates, this is probably the best time to repair our roads, build bridges and new train tracks.”

Guerron added, “If infrastructure will be fixed at any point in the next 10 or 20 years, today is probably the best time. Not only the interest rates are low, but also part of the investment in infrastructure will increase growth, which makes repaying debt easier.”

But any $10 trillion push would likely see resistance from congressional lawmakers, considering the nation’s near-record debt levels and its implication of widespread tax increases.

Biden’s proposal would be partially funded by boosting the corporate tax rate from 21 percent to 28 percent and global minimum tax from about 13 percent to 21 percent, measures that reverse former President Donald Trump’s 2017 tax cuts. The plan calls for spending over the course of eight years, with the tax hikes covering the cost over a fifteen-year period.