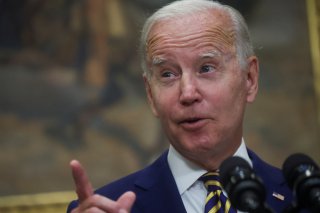 The Biden administration’s sweeping federal student loan forgiveness plan could result in an average burden of roughly $2,500 per taxpayer, according to a new analysis conducted by the National Taxpayers Union.

“There’s a transfer of wealth from the society at large to people who borrowed to go to college right now,” said Andrew Lautz, director of federal policy at the National Taxpayers Union, per CNBC.

In all, the student debt cancellation action could ultimately cost taxpayers about $400 billion.

Late last month, President Joe Biden announced a wide-ranging plan to cancel massive amounts of federal student loan debt for an estimated forty-three million borrowers, many of whom are low- to middle-income earners. The action is also expected to completely wipe clean the student loan debt of about twenty million individuals.

Those with federal student loans who make under $125,000 annually, or couples earning less than $250,000, qualify for up to $10,000 in forgiveness. However, if a borrower received a Pell Grant to attend college, they could potentially get up to $20,000 in relief. The White House has confirmed that approximately 60 percent of all federal student loan borrowers received Pell Grants, which are only given to undergraduate students who “display exceptional financial need and have not earned a bachelor's, graduate, or professional degree” and “does not have to be repaid, except under certain circumstances,” according to the Education Department.

Furthermore, the student loan announcement extended the moratorium on repayments until January and created a new income-driven repayment (IDR) plan that is designed to assist people who have a difficult time making large monthly payments and dealing with accrued interest.

Meanwhile, the Biden administration fired back at Republican lawmakers who are considering bringing a legal challenge against the decision to forgive student loan debt.

“Let’s be clear about what they would be trying to do here: The same folks who voted for a $2 trillion tax giveaway for the rich and had hundreds of thousands of dollars of their own small business loan debt forgiven would be trying to keep millions of working middle-class Americans in mountains of debt,” White House spokesman Abdullah Hasan told CNBC on Friday.