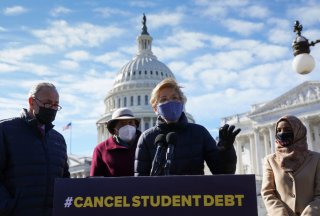 In the Biden administration’s latest concerted effort to cancel student loan debt, the Department of Education has announced that it will wipe out $415 million in federal loans owed by nearly 16,000 borrowers who attended certain for-profit schools.

“The Department remains committed to giving borrowers discharges when the evidence shows their college violated the law and standards,” Education Secretary Miguel Cardona said in a statement on Wednesday. “Students count on their colleges to be truthful. Unfortunately, today’s findings show too many instances in which students were misled into loans at institutions or programs that could not deliver what they’d promised,” he continued.

To date, under Cardona, the department has canceled a total of roughly $2 billion in borrower defense claims from more than 107,000 individuals. “When colleges and career schools put their own interests ahead of students, we will not look the other way,” Federal Student Aid Chief Operating Officer Richard Cordray said in a statement.

“We are grateful to have strong enforcement and oversight partners, such as the Federal Trade Commission and attorneys general in Colorado, Illinois, and New Mexico. These offices provided key evidence that played a significant role in reaching the findings announced today. Moving forward, we intend to expand our collaboration with federal and state partners to serve students,” he added.

One of those for-profit schools affected by the announcement is DeVry University, which was found to have misled prospective students from 2008 to 2015. The school falsely claimed that 90 percent of its graduates were able to land jobs in their particular fields of study within six months of graduation. However, in reality, the job placement rate was sitting at 58 percent, according to the Education Department.

Donna Shaults, a spokesperson for DeVry University, told CNBC that the school’s board and leadership have changed since the initial allegations. “Nonetheless, we do believe that the Department of Education mischaracterizes DeVry’s calculation and disclosure of graduate outcomes in certain advertising, and we do not agree with the conclusions they have reached,” she said.

In recent weeks, the Education Department has also decided to freeze the seizures of tax refunds, Social Security, and other government payments involving federal student loans that are in default.

The department—in addition to other federal and state agencies—have the authority to collect on delinquent debt via the Treasury Offset Program, which was paused due to the coronavirus pandemic. That policy ends after May 1, but the Education Department will hold off on restarting collection for six months after the moratorium concludes.

“This policy means you won’t lose money from certain government payments, such as the child tax credit, Social Security payments, and tax refunds for the 2022 tax season,” the agency’s website says.