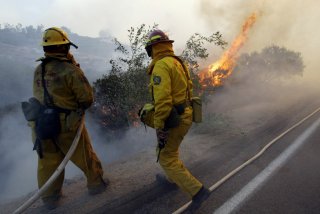 In recent years, it often seems that the wildfire season in the United States continues to get longer and deadlier.

In fact, this year California has endured what is now the second-worst wildfire season in the state’s history, having now burned 2.5 million acres across the state.

Now, new research, published in the journal Proceedings of the National Academy of Sciences, conducted by scientists from UCLA and Lawrence Livermore National Laboratory is strengthening the case that human-caused climate change is driving the more intense wildfire seasons—and that the trend will likely worsen in the years ahead.

“I am afraid that the record fire seasons in recent years are only the beginning of what will come, due to climate change, and our society is not prepared for the rapid increase of weather contributing to wildfires in the American West,” Rong Fu, a UCLA professor of atmospheric and oceanic sciences and the study’s corresponding author, said in a statement.

The dramatic increase in destruction from wildfires was easily seen in the data from the U.S. Geological Survey.

“And in 2020, according to a National Interagency Coordination Center report, the amount of land burned by wildfires in the West reached 8.8 million acres—an area larger than the state of Maryland,” it continues.

In concluding the study’s findings, the research team applied artificial intelligence to climate and fire data in an effort to better estimate the roles that climate change and other factors play in determining the key climate variable tied to the risk of wildfires—vapor pressure deficit.

“Large wildfire-burned areas, especially those not located near urban areas, tend to have high vapor pressure deficits, conditions that are associated with warm, dry air,” it adds.

Due to Climate Change

The study eventually discovered that the sixty-eight percent of the rise in vapor pressure deficit across the western United States from 1979 to 2020 was likely due to human-caused climate change. The remaining thirty-two percent was likely caused by naturally occurring changes in weather patterns.

“Our estimates of the human-induced influence on the increase in fire weather risk are likely to be conservative,” Fu noted.

“Our results suggest that the western United States appears to have passed a critical threshold—that human-induced warming is now more responsible for the increase of vapor pressure deficit than natural variations in atmospheric circulation. Our analysis shows this change has occurred since the beginning of the twenty-first century, much earlier than we anticipated,” she continued.