Surging Gas Prices Are Keeping Motorcycle Riders off the Road 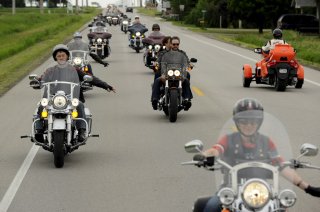 There’s no question that millions of car drivers all across the country are still frustrated by the fact that the national average price for a gallon of regular gas is sitting at $4.15, according to AAA.

But, as reported by Newsweek, what hasn’t grabbed daily headlines recently is that motorcycle riders are also being hit hard by the elevated fuel prices. In fact, the current environment is directly affecting how much time Americans spend on the road, as well as their riding habits.

According to a survey by the motorcycle sales site Cycle Trader, 34 percent of riders have cut back on how often they ride, such as passing on recreational trips or only going out when necessary. Moreover, 21 percent of respondents admitted that they have cut down on how far they ride, while 12 percent have stopped riding their bikes entirely.

In addition, among the poll’s respondents, 35 percent pinpointed high gas prices as the reason for making them change their riding habits.

“I don't accelerate as quickly as before and coast more,” one rider said in a survey response. “I'm much more mindful of maximizing MPG as I ride.”

Relief on the Way?

There is hope, however, that high gas prices will moderate in the coming weeks. Earlier this week, Patrick De Haan, head of petroleum analysis at GasBuddy, said that the national average could potentially drop between four and nine cents a gallon.

“We are now seeing it continue to drop. In fact, the national average is now down to about $4.16 a gallon. That's 19 cents lower than where prices peaked,” he said. “We're now into the second week of declines and I do expect that most of the country should continue to see a little bit of relief at the pump.”

De Haan added that much of the price action in the future will be “contingent on what happens between Russia and Ukraine.”

Meanwhile, per Yahoo Finance, major oil company executives tried to defend their record profits against accusations of price gouging before the House Energy and Commerce Subcommittee on Wednesday.

Committee Chairman Rep. Frank Pallone (D-NJ) called out the oil producers for “ripping off” consumers instead of providing necessary financial relief. “They’re buying back their stock at an estimated cost of $40 billion this year,” he said.

“Big oil is lining their profits with one hand and taking billions in taxpayer subsidies with the other. Meanwhile, American people are getting ripped off as companies choose to keep production low so their own profits stay high,” Pallone continued.

However, Exxon Chairman and CEO Darren Woods responded by saying that gas prices are simply the function of supply and demand.

“No single company sets the price of oil or gasoline,” he said. “The market establishes the price based on available supply, and the demand for that supply.”