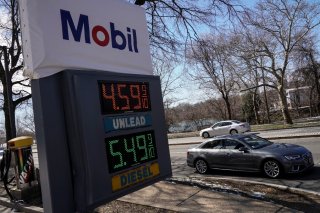 Much to the frustration of motorists all across the country, the national average price for a gallon of regular gas is still sitting well over $4, even reaching nearly $6 in some counties in California.

A troubling trend is emerging against this concerning backdrop: more Americans are trying to drive as far as possible without refueling. According to KLAS in Las Vegas, “some drivers are waiting for as long as they can before making another trip to the gas station, putting themselves at risk of running out completely on the road.”

Nevada Freeway Service Patrol technician Tim Stankovich told the news station that these days, about 25 percent of the people he helps on a given day are in need of assistance because they have run out of gas.

“We’re getting a lot of people who are running out of gas, already had one this morning and I had three yesterday,” he noted. Stankovich added that running out of gas on roads can pose its own set of problems.

“They stall out in the middle of the freeway, it’s going to cause a traffic congestion,” he said. “People are trying to make ends meet sometimes, gas is super expensive.”

Relief in the Offing?

There is hope, however, that such issues could already be heading toward the rearview mirror. According to Patrick De Haan, head of petroleum analysis at GasBuddy, the national average for a gallon of gas could potentially drop nearly 50 cents.

“We are now seeing it continue to drop. In fact, the national average is now down to about $4.16 a gallon. That's 19 cents lower than where prices peaked,” he told The National Desk.

“We're now into the second week of declines and I do expect that most of the country should continue to see a little bit of relief at the pump,” he continued, adding that much of the price action will be “contingent on what happens between Russia and Ukraine.”

Meanwhile, the Biden administration confirmed last week that it would release one million barrels of oil per day from the nation’s Strategic Petroleum Reserve (SPR) for the next six months as domestic producers ramp up production.

President Joe Biden seemed confident that gas prices would head lower in response—though he wasn’t sure by exactly how much. “It will come down, and it could come down fairly significantly,” he said, adding that the drop in price could range from ten cents to thirty-five cents per gallon.

“The president’s again using the SPR essentially for price ceilings to continue to hold the price of oil from going up to new levels, especially in light of talk that continues between the EU countries about potentially sanctioning Russia’s energy,” De Haan explained.