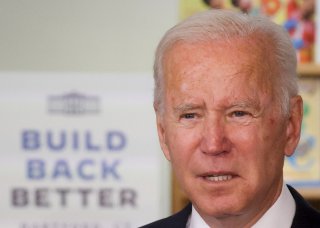 More than thirty-five million American parents are in line to receive their final installment of the monthly enhanced child tax credit payments this week unless Congress can quickly pass the highly contentious Build Back Better legislation.

President Joe Biden’s massive $1.9 trillion American Rescue Plan, passed last March, enabled the federal government to give eligible parents as much as $3,600 per year for a child under the age of six and up to $3,000 for children between ages six and seventeen. Broken down further, this all means that a $250 or a $300 payment for each child has been direct-deposited each month since July.

However, these extra funds that millions of parents have come to rely on will be a thing of the past if the Build Back Better bill fails, as it includes a one-year extension of the popular credits. Without the measure, the maximum child tax credit would plummet by $1,000 per school-aged child and $1,600 per child under six. In addition, millions of the nation’s lowest-income families would become ineligible for the credits once again.

Shedding even more concerning light on this issue is a new survey released by ParentsTogether Action, a family advocacy nonprofit that has more than 2.5 million members nationwide.

“After half a year of child tax credit payments, it is clear that American parents have used this money to pay for the basic necessities families need: food, housing, and childcare. Families are still reeling from the pandemic’s impact, even as a new variant is emerging, so it’s crucial that these payments continue into 2022,” Bethany Robertson, the co-director of ParentsTogether, said in a statement.

“Millions of families are on the brink, and ending these lifesaving payments this month will drive up childhood hunger and family poverty. American families need the Senate to vote to extend the child tax credit payments now,” she continued.