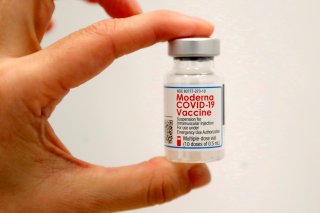 Biotechnology company Moderna, best known for the creation of its mRNA coronavirus vaccine, announced on Thursday that, while its shot would remain 93 percent effective against the disease for six months following the second dose, a third shot would probably become necessary during the winter months. The health recommendation comes as case numbers affected by the highly contagious “delta variant” surge.

In a statement posted to its website, Moderna suggested that “increased force of infection resulting from [the delta variant], non-pharmaceutical intervention (NPI) fatigue, and season effects” would lead to “an increase of breakthrough infections in vaccinated individuals.” Consequently, it continued, “while we see durable Phase 3 efficacy through 6 months, we expect neutralizing titers will continue to wane and eventually impact vaccine efficacy. Given this intersection, we believe [a] dose 3 booster will likely be necessary prior to the winter season.”

The vaccine maker reported that it planned to complete its application for a third shot from the Food and Drug Administration (FDA), which regulates vaccines in the United States, by the end of August.

Despite the vaccine’s high level of overall effectiveness against the virus, Moderna underlined that the immunity most Americans have to the virus would fade over time. It raised concerns about the end of immunity coinciding with the winter season, which saw a massive spike in cases in 2020.

The White House has also tentatively approved of booster shots for certain high-risk individuals. Dr. Anthony Fauci, President Joe Biden’s chief medical adviser, said on Thursday that the administration was attempting to secure booster shots for immunocompromised Americans at greater risk of serious health complications from the coronavirus “as quickly as possible.”

Moderna’s recommendation of a booster shot comes after Pfizer, which created the other major vaccine in the United States, recommended a third shot in April. Some hospitals have also allowed Johnson & Johnson vaccine recipients to receive a third shot. Other countries, including France and Germany, have also offered booster shots to immunocompromised and elderly citizens.

However, the CDC has been noncommittal on the issue of booster shots, suggesting that they were “not necessary at this time.” The shots have also faced opposition from the World Health Organization (WHO), which has urged rich countries to redistribute vaccines used for booster shots to be used as regular doses in poorer nations. The WHO’s request has itself been the subject of criticism, including from the Biden administration, when White House Press Secretary Jen Psaki suggested that the United States could continue to administer booster shots while continuing to donate excess vaccines.