Is Tom Cotton Getting Ready to Run for President? 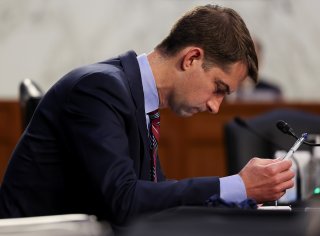 Sen. Tom Cotton (R-Ark.) is reviving an old tradition among White House hopefuls, as he maps his summer travel plans through Iowa, an early presidential caucus state, to crow for House Republicans running for office in the 2022 midterm elections.

Cotton, a 2024 potential presidential contender, is planning a slew of appearances through the state, joining a broader Republican overhaul to take back control of the House and Senate in next year’s elections. The rumored candidate has also reportedly been maintaining contact with House Minority Leader Kevin McCarthy (R-Calif.) about the midterm elections and has even plotted a marketing campaign for candidates that he endorsed through a political action committee.

The Arkansas senator has also headlined two virtual events for New Hampshire’s GOP this year, another early presidential caucus state, and is traveling to Nevada in August.

Cotton’s travel plans are the latest effort to dive into congressional races, offering him not only a chance to bolster his support for the candidates, but also allowing him to gain exposure with voters and the media and to build a foundation among lawmakers and activists in early presidential nominating states.

“At this point, 2024 Republican presidential hopefuls are trying to build networks of support among party elites in states with early primaries and caucuses such as Iowa, New Hampshire and South Carolina. Since Cotton does not have much of a network in any of these states, these trips are an opportunity to build a base of support there,” Andrew Dowdle, political science professor at the University of Arkansas, said. “Despite the fact these states will have only a handful of delegates in 2024, the hope is to use momentum from good showings in these early contests to do well in later delegate-rich contests.”

Jacob Neiheisel, campaign expert and associate professor of political science at the University of Buffalo, noted, “Getting involved in congressional races may be a way to stake out some unique ideological territory. Doing so may also offer a fairly cheap, low-risk way to pilot various messaging strategies and keep a presidential hopeful's name in the press and on voters' minds.”

But Cotton isn’t the only potential GOP presidential prospect that has gotten involved in the 2022 midterm races.

Former Vice President Mike Pence, another rumored White House hopeful, will speak at an event for Republicans in New Hampshire on Thursday, an event that the Concord Monitor dubbed as an “unofficial start to the 2024 presidential race.” Former Secretary of State Mike Pompeo headlined a fundraiser for the National Republican Congressional Committee. And former U.S. ambassador to the United Nations Nikki Haley has hosted several events for Republican women in the House.

“The problem for anyone running for president three years from now is demonstrating their political strength—and making friends and allies—for an event so far in the future. So the 2022 congressional races offer an opportunity for anyone on either side to try to make some progress before they can actually campaign,” Jonathan Krasno, a political science professor at Binghamton University, said. “No better place to do that than Iowa, unless it's New Hampshire.”

Their efforts within the Republican Party, however, come as former President Donald Trump holds an iron-like grip over the GOP, leaving voters and lawmakers wondering whether he will launch a third presidential campaign in 2024, an idea that he’s repeatedly teased at press events and speeches.

“Like many [2024] Republican aspirants, Cotton is faced with the dilemma of trying to build an effective organization to compete in 2024 if Trump doesn't run, while not looking like... he is challenging Trump if he does decide to mount a candidacy,” Dowdle said.

Trump’s massive influence over congressional lawmakers and voters have essentially redefined the Republican Party, forcing GOP lawmakers to decide how closely they will stick to the former president and his ideology. Republicans didn’t convict Trump for his involvement in the insurrection on the Capitol building in January, and several party leaders have voiced that in order to win back the House and Senate, they must maintain Trump’s support.

“All of these folks will tread carefully with Trump lurking in Mar-a-Lago, but here the calendar works to their advantage because they can all say they're helping out Republican candidates and not running for president,” Krasno said. “They'll play this game of not running for quite awhile more until financial pressures to establish campaign committees forces them off the fence. But I doubt that will happen until well into 2023.”

Trump will hit the House race campaign Saturday as he will be the main speaker at the North Carolina’s Republican Party’s state convention. The former president has also plotted a number of appearances at rallies in June and July that would maintain his popularity within the GOP and give him the opportunity to bolster his support for candidates pursuing office next year.

“Trump has an exclusive ‘option’ to the Republican nomination if he elects to run. Or he can decline the ‘option,’” Dowdle said. “The problem for the other Republican hopefuls is they are effectively in limbo until Trump decides.”

But overall, Cotton and other potential GOP presidential contenders’ underlying interests is that their loaded efforts in regaining control of both congressional chambers in the 2022 midterms will be politically recognized in the future, especially if they decide to take a crack at the White House in three years.