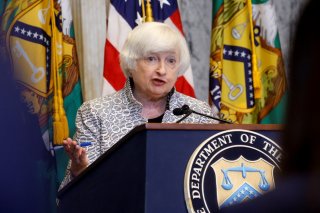 Treasury Secretary Janet Yellen on Thursday confirmed that she believes that the current red-hot inflationary pressures will retreat “certainly next year,” although there are risks to that outlook including the ongoing war in Ukraine, MarketWatch reported.

“I believe [inflation] is going to come down certainly next year, although, let’s be clear, there are risks,” the former Fed chairwoman said during a conference sponsored by the Atlantic Magazine.

“The Russian invasion of Ukraine hasn’t come to an end, we’re seeing [Russian President Vladimir] Putin weaponize oil and gas in fighting this war, so we remain vulnerable to supply shocks. But I think the [Federal Reserve] is clearly committed to bringing inflation down, and I expect that to be successful,” she continued.

On Wednesday, in an effort to tackle inflation levels that are still sitting at roughly forty-year highs, the Federal Reserve signed off on a third consecutive seventy-five-basis-point interest rate hike and suggested that it will keep raising rates well above the current level. With the largely expected aggressive move, the central bank took its federal funds rate up to a range of 3 percent to 3.25 percent, the highest level seen since the global financial crisis in 2008.

According to CNBC, projections from the Fed meeting indicated that the central bank expects to hike rates by at least 125 basis points in its two remaining meetings this year. Officials also signaled the intention of continuing to boost rates until the funds level hits a “terminal rate,” or endpoint, of 4.6 percent next year, implying a twenty-five-basis-point hike in 2023 but no rate cuts.

“The FOMC (Federal Open Market Committee) is strongly resolved to bring inflation down to 2 percent, and we will keep at it until the job is done,” Fed Chairman Jerome Powell said in his post-meeting news conference.

However, Yellen noted that she was skeptical that target would be achieved next year.

“Two percent is the goal, and perhaps we don’t get there next year, but I certainly expect to see inflation come down,” she said.

Amid the Fed’s hawkish stance, Powell also conceded that a hard landing, or a recession, is certainly possible, particularly if the central bank has to keep tightening aggressively in the months ahead.

“No one knows whether this process will lead to a recession or, if so, how significant that recession will be,” he said.

Meanwhile, Peter Boockvar, chief investment officer at Bleakley Financial Group, told CNN Business that “the Fed has now entered the ‘danger zone’ in terms of the rate shock they are throwing onto the U.S. economy.”