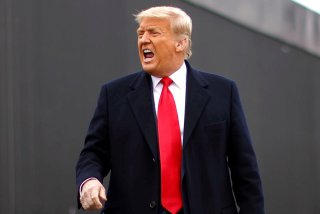 On Wednesday, the same day that tweets by former President Donald Trump were used against him in his second impeachment trial, a Twitter executive reiterated the news: Trump’s ban from Twitter is permanent, even if Trump runs for president again in 2024, and even if he wins.

Twitter’s chief financial officer, Ned Segal, appeared on CNBC’s Squawk Box Wednesday. He was asked what the status would be of Trump’s “permanently banned” account, in the event of a political comeback.

“He was removed when he was president, and there’d be no difference for anyone who’s a public official, once they’re removed from the service,” Segal said.

After several months in which disclaimers were affixed to many of the president’s tweets, and policies were put in place to deal with misinformation related to the election, Twitter officially announced on January 8—two days after the Capitol attack—that it had “permanently suspended” the @realDonaldTrump account, “due to the risk of further incitement of violence.”

“In the context of horrific events this week, we made it clear on Wednesday that additional violations of the Twitter Rules would potentially result in this very course of action,” Twitter’s January blog post said. “However, we made it clear going back years that these accounts are not above our rules entirely and cannot use Twitter to incite violence, among other things. We will continue to be transparent around our policies and their enforcement.”

And while the more than twenty thousand tweets from the former president’s account can no longer be viewed on Twitter itself, they have been preserved by the National Archives, for the benefit of future historians, and probably for plenty of lawyers as well.

Florida Gov. Ron DeSantis, a Trump ally, this week announced a plan to “fine social media companies $100,000 if they de-platform a political candidate,” per CBS 12.  One professor described that plan as “hilariously unconstitutional,” while a lawyer went with the phrase “stupidly unconstitutional.”