Trump and the Left Agree: Secretaries of State Are a Big Deal 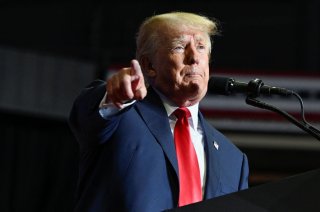 Who says politics is too polarizing? Donald Trump and MoveOn seem to have found something they agree on.

Raffensperger’s biggest challenge likely came in June when he defeated Trump-backed candidate Rep. Jody Hice in a Republican primary with the central issue being a relitigation of the 2020 election.

Yet he’s still facing Democrat opposition from Bee Nguyen in November, which is one of the key races targeted by MoveOn according to a fundraising message over the weekend from the group that says, “Fascism vs. Democracy.”

“Raffensperger championed one of the most restrictive voting rights laws that the GOP pushed after losing the 2020 election,” the alarmist fundraising appeal says.

This once obscure state office was associated with business licenses and various other administrative tasks that drew little interest from voters. Now, since election operations are among those administrative duties, the offices are high stakes.

“Without overstating it, stopping Trump from returning to the White House in 2024 may well depend on these five Democratic candidates winning their seats,” the MoveOn appeal says.

Well, Heavens to Betsy! It’s the only way to stop Trump!

There will be twenty-seven secretary of state contests on the 2022 ballot, according to Ballotpedia, though only a few are high stakes and competitive.

Taking a cue from the MoveOn fundraising message, the Washington Post dutifully made a similar warning Monday about most of the same contests, while also noting, “secretary of state races are starting to get a lot more national attention and money.”

CNN ran an almost hand-wringing account asserting that Republican secretary of state nominees in eleven states had been “election deniers,” although the term seems to be applied fairly broadly.

Much like everything else that can be tied even in the most remote way to Trump, it can warrant people losing their heads and a feeling of panic has set in.

As I explained in my new book, The Myth of Voter Suppression, actions by secretaries of state could have had some impact on election outcomes. That doesn’t mean the vote count was fraudulent.

Stacey Abrams insisted without evidence that she was the rightful winner of the 2018 governor’s race. Much of this certainty hinged on the fact that her opponent Brian Kemp was the secretary of state overseeing election procedures.

This prompted pro-Trump protests of the 2020 outcome in the Peach State to point to the newly-lax standards. It also led the state, in 2021, to expand voter ID to mail-in ballots.

In a somewhat reverse situation of Kemp in Georgia, Democrat secretary of state Katie Hobbs is running for governor this year in Arizona and similarly, Republicans were untrusting. Enough so that the GOP majority legislature passed a law to prevent Hobbs from taking part in election lawsuits, leaving it only to the state attorney general.

In an era when candidates on both sides—Donald Trump and Stacey Abrams come to mind—have been unwilling to concede losses, these one-time administrative, almost egghead elected positions of secretary of state are drawing national attention, big money, and the hyperbolic political rhetoric befitting a presidential race.

Fred Lucas, the author of “The Myth of Voter Suppression,” is the manager of the Investigative Reporting Project at The Daily Signal.