Trump Supporters Never Realized That They Backed a Losing Team 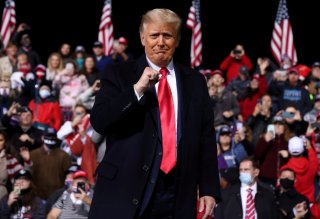 Americans are divided politically, and social media is filled with cultural grievances and finger-pointing.  Looking at MAGA nation—supporters of former President Donald Trump—one sees not only grievance but also patriotic spirit, and passion for American freedom. One would think many are diehard sports fans, too. There is one major difference though. NFL fans always know their team’s win-loss record, and can tell you how the head coach and the quarterback are performing on the field.  As a longtime media celebrity before becoming President, Trump developed a loyal fan base, many of whom still love his trash talk and end zone dances.  But what about his win-loss record on the world stage, where the president alone must handle those high-wire tests of national power? Did Trump deliver on his pledge to “Make America Great Again”? Let’s go to the game tapes.

Start with his signature campaign promise: “Who’s going to pay for the wall?” A week after he took the oath, the world saw Trump pleading with Mexico’s President Pena Nieto to help pay for the border wall.  Trump threatened him with tariffs, and Pena Nieto canceled a visit to Washington. But Mexico’s answer was no. Thus the score is  0-1.

Then there is Iran.  Trump pulled out of the nuclear accord, Mike Pompeo issued twelve demands, and the administration put a “maximum pressure” squeeze on Iran’s economy, sanctioning oil exports, banks and other businesses, aimed at forcing the Iranians back to the negotiating table to accept a better deal.  Iran stepped up its nuclear enrichment and shadow militia attacks on U.S. troops and allies, but never gave in to Trump’s pressure. The score moved to 0-3.

On to Asia: Trump crossed the globe three times to try and persuade North Korea’s Chairman Kim Jong Un to give up his nuclear weapons program and missile delivery systems. After the Singapore meeting, the White House claimed that Trump had secured a “firm and unwavering commitment” from Chairman Kim to carry out “complete denuclearization.” Trump cancelled military exercises needed to prepare American and South Korea forces to defend against a North Korean assault.  But all these concessions produced no reduction in the North Korea threat. The score moved to 0-4.

Trump’s “Super Bowl” was his trade war with China.  His tariffs raised prices and risked tens of billions in US annual agriculture exports, as China turned to other suppliers. The upper Midwest dairy industry came to resemble the Soviet Union during the 1950s, pouring out milk to satisfy production quotas, and living off government subsidies.  Many went out of business.  The agreement they announced—“Phase One”—contained Chinese pledges to trade on market terms, respect dispute mechanisms, and open up to more foreign products at some point in the future.

Despite the fine words about free trade, the heart of the deal was ‘managed trade’: a promise of government-directed Chinese purchases of U.S. goods.  China conceded nothing on its massive subsidies and other distortions of the free market; these would have to await “Phase Two,” to be negotiated “in a second term.”   After the White House began scapegoating Beijing for initially allowing the deadly virus to spread without warning the world, as a way to deflect blame for its own catastrophic mishandling of the pandemic, Mike Pompeo asserted that U.S. presidents for the past fifty years had naively misunderstood the Chinese Communists. He was right about the previous three years. The score changed to 0-5.

Trump’s record on non-trade China issues lacked even a fig leaf of accomplishment. Although a special Hague tribunal had ruled in 2016 that China’s expansive territorial claims from northeast Asia to the South China Sea were invalid, the Trump team stayed largely mute until its final months. Beijing’s forceful seizure of political control over Hong Kong, in blatant violation of its 1984 “handover” accord with the UK, faced no meaningful restraint from Trump.  On his watch, China expanded its regional hegemony unopposed. The score moved again: 0-6.

Russia faced even less pushback from Trump, despite having invaded Ukraine—the first military land-grab on the European continent since World War II. Call that one a default. The score after that was 0-7.

In the win column, the NAFTA trade agreement between the United States, Canada, and Mexico was updated and renamed. That win changed the score to 1-7.

Team Trump also claimed, and deserves, a share of credit for the Abraham Accords, Israel’s normalization agreements with UAE and Bahrain, subsequently joined by Sudan and Morocco.  Yet the UAE was the real trailblazer in that process, offering normalization to persuade Israel not to annex parts of the West Bank.  The “Deal of the Century” promised by Trump was supposed to resolve Israel’s complex issues with the Palestinians. The U.S. plan was dead on arrival, rejected by the Palestinians, and as the recent Gaza conflict showed, the situation is only getting worse. Add a win and a loss to the tally.  The score shifted to 2-8.

So, in NFL terms, even leaving aside his epic pandemic failure, Trump on the world stage went 2 and 8. That’s the geopolitical equivalent of the Jacksonville Jaguars and New York Jets.  During this off-season, both the Jags and the Jets fired their head coaches and used first-round picks to draft elite new quarterbacks. MAGA nation should not be surprised that the American citizen “fan base,” even some who identify with Trump’s cultural attitudes, voted to change their leader and hopefully end America’s losing streak around the world.

Surely the military veterans within MAGA nation could see that Trump as commander-in-chief showed no interest in the missions of America’s deployed forces other than to call for their withdrawal from Syria, Afghanistan, Germany, and South Korea, while disparaging allies and alliances and insulting our senior military leaders.

After seeing Trump get shaken down by an adult film actress for $130,000, is it any surprise that Vladimir Putin, Xi Jinping, Kim Jong Un, the ayatollahs of Tehran, Maduro, Mexico’s leaders, and others judged that in any test of wills this president, for all his big talk, would blink first? They were right. So, while the MAGA folks may enjoy Trump the celebrity with his colorful persona, they must know that American power will never be respected by other nations when in the hands of a novice who can’t find the end zone.

By the way, this sports report does not come from the Left or the Right but from someone who is proud of their service as a politically appointed national security policy official in five previous Republican administrations, beginning with two terms in the Reagan Pentagon.  It was inspiring to work long hours alongside career civilians and military officers, including combat veterans and former prisoners of war, as one American team, advancing U.S. interests around the world. Additionally, this sportscaster is a lifelong Patriots fan. Like all NFL fan bases, New England fans stay fiercely loyal to their team in good times and bad yet still care about winning.

Washington was able to exert more influence when all Americans cared about that outcome.

Lincoln Bloomfield held policy positions in the Departments of State and Defense, and the White House, during the Reagan and both Bush Presidencies.