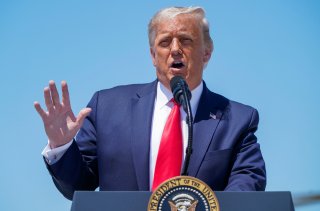 President Donald Trump threatened to take executive action on Wednesday to accelerate the next round of coronavirus relief aid as Americans see a plunge in income with unemployment in the double digits and benefits from the first package expired.

With Congress too polarized to quickly negotiate the upcoming coronavirus relief package, the Trump administration has considered looking into action to continue the eviction moratorium, temporarily cut payroll tax and extend unemployment benefits.

“We’re negotiating right now as we speak and we’ll see how that works out,” Trump said at a coronavirus press briefing. “In the meantime, my administration is exploring executive actions to provide protections against eviction. . . . As well as additional relief to those who are unemployed as a result of the virus. Very importantly, I’m also looking at a term-limited suspension of the payroll tax.”

It’s unclear if the president has the power to issue an executive order in this scope since Congress controls all federal funding.

“I’ve been working around-the-clock to look at the options the president has at his disposal within the confines of his legal authority within the executive branch,” White House Chief of Staff Mark Meadows said. “We are looking at a number of creative ways to address the real needs.”

The Trump administration called on federal agencies that received aid from the $2 trillion Cares Act passed in March to redirect any remaining funds for the next—probably multi-trillion dollar—bill or to provide temporary relief to Americans who are financially struggling.

House Speaker Nancy Pelosi (D-Calif.) said Trump might be able to extend the eviction moratorium but noted that the president can’t do much without Congress’ approval.

“And, again, he can’t do the money without the Congress of the United States,” Pelosi told MSNBC. “The power of the purse begins in the House,” she added, referring to Congress’s constitutional authority over spending.

Trump threatened to unleash executive force as White House officials and top Democrats negotiate almost daily, stalling the process of passing the bill. Both sides of the aisle remain divided on key provisions including the extension of unemployment benefits and funding for state and local governments.

Meadows and Treasury Secretary Steven Mnuchin have been in talks with Pelosi and Senate Minority Leader Charles Schumer (D-N.Y.) for over a week and expect to strike a bipartisan deal by Friday and hold a vote next week. But, as disagreements tighten Meadows said Wednesday that it’s useless to negotiate any further than Friday. Democrats aren’t budging with their provisions in their $3.4 trillion bill passed by the House in May—despite agreeing to cut U.S. Postal Service Funding.

“I feel optimistic that there is a light at the end of the tunnel, but how long that tunnel is remains to be seen,” Pelosi said.

One of the key areas of disagreement is the issue surrounding unemployment benefits. Republicans argue that an extension of the $600 per week jobless bonus established in the Cares Act offers a disincentive to work since unemployed Americans could be potentially making more money than when they were working. This week, the Trump administration proposed to extend the benefits into December at $400 per week, according to NBC News and Politico. But, Senate Republicans argued to set the insurance at $200 per week through September and then mend the benefit to be a percentage of wage earnings.

The GOP version of the bill capped the total price tag at $1 trillion, a figure that Pelosi and other top Democrats have argued doesn’t fit the financial needs for Americans.

Negotiations are set to continue Thursday, in hopes with a finalized bill Friday.