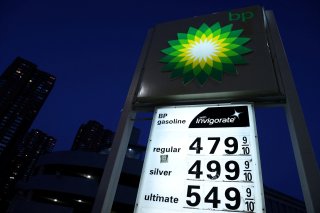 After weeks of warnings, American drivers are now confronting the grim reality of $4 gas.

The price of regular gasoline rose to above $4 per gallon on average across the United States over the weekend. It’s the first time that has occurred since 2008. As of Tuesday afternoon, the national average was an all-time high $4.173 per gallon, according to AAA.

The previous all-time high for average gasoline prices was set in July 2008, when it came in at $4.11 per gallon.

According to AAA, the price of regular gas surged by roughly 41 cents during the first full week of Russia’s invasion of Ukraine. That’s the second-biggest jump in average national prices in a week.

“This is a milestone that was hard to imagine happening so quickly, but with bipartisan support of severe sanctions on Russia, is not exactly surprising—it is the cost of choking off Russia from energy revenue,” Patrick De Haan, head of petroleum analysis for GasBuddy, said in a statement. “As Russia’s war on Ukraine continues to evolve and we head into a season where gas prices typically increase, Americans should prepare to pay more for gas than they ever have before. Shopping and paying smart at the pump will be critical well into summer.”

Even with record prices already here, prices could continue to increase.

There are also increasing fears that gas prices could eventually reach an unthinkable $6 or $7 per gallon.

“My guess is that you are going to see $5 a gallon at any triple-digit (oil prices) … as soon as you get to $100,” Energy Word founder Dan Dicker recently told Yahoo Finance Live in mid-Feburary. “And you might get to $6.50 or $7.”

According to Newsweek, it appears that day has already nearly arrived. A Shell station off Olympic Boulevard in Los Angeles confirmed that its current price for a gallon of regular gas is $6.99. Premium gas costs $7.29 per gallon and midgrade gas is $7.19.

“I don’t think we’ve ever paid that (much for gas) ever,” one local resident told KABC-TV.